Thor Eells, a retired SWAT commander from Colorado Springs, Colo., now executive director of the National Tactical Officers Association [says] modern semi-automatic handguns are very quick and easy to reload, so the size of the magazine doesn’t give an attacker that much of a practical advantage over police.

Eells says it’s “plausible” that mass shooters often opt for extended magazines, believing they may compensate for their lack of skill with the firearm. But he says the reality is that a high-capacity magazine may actually become a hindrance, by jamming. 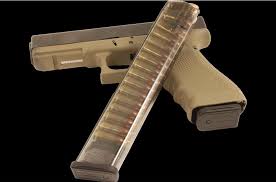 While there have been repeated calls for federal restrictions on extended magazines in recent years, the attachments have been essentially unregulated since the federal assault weapons ban expired in 2004.

There are restrictions in about one-fifth of the states, including California, which in 2000 banned new sales of magazines that hold more than 10 rounds. A 2016 ballot initiative went further, banning even the ownership of high-capacity magazines that had been purchased legally.

Gun-rights groups challenged the California law, and in March a federal judge agreed with them that ban was unconstitutional. In his opinion, Judge Roger Benitez determined that the magazines qualified as “arms” and are covered by the Second Amendment.

“I was a bit surprised, but I was pleased,” says Michael Hammond, of Gun Owners of America. He says the ruling gives him hope that the new conservative tilt of the Supreme Court will similarly protect the rights to own guns and accessories.

Hammond sees efforts to restrict accessories — whether extended magazines, noise suppressors or bump stocks — as part of a broader attack on guns themselves.

“It’s an effort by [gun-control groups] to put points on the board. It’s an effort by them to use these horrific tragedies to demonstrate that they’re making political progress in their effort to destroy the Second Amendment.”

Mom Holds Suspect at Gunpoint for 26 Minutes Before Police Arrive