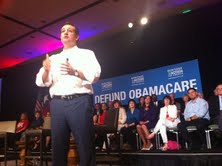 MYTH #1: THAT CONSERVATIVES LIKE SENATORS MIKE LEE AND TED CRUZ ARE “THREATENING TO SHUT DOWN THE GOVERNMENT.”

Republicans have only two choices: After pretending to oppose ObamaCare 40 times (only to have Harry Reid spit in their faces 40 times) they can dutifully fund the program (because they don’t want Obama, Reid, and their cronies to yell at them) — or they can not fund ObamaCare.

The Lee-Cruz Strategy is to send Harry Reid and/or Barack Obama a government funding bill that is unacceptable to them in one respect — it either refuses to fund ObamaCare or simply refuses to fund the individual mandate. If the House is wise, it will send a new bill over to the Senate every day.

If Obama and/or Harry Reid choose to shut down the government for the SOLE REASON that preserving their wildly unpopular individual mandate is more important to them than keeping the government open, the burden’s on their shoulders.

How hard is it to say, over and over and over again, “If Obama signs any of the ten government funding bills we’ve passed, the government will open up tomorrow. The sole problem is his insistence that we pay for his efforts to cram his expensive insurance down Americans’ throats.”

MYTH #2: THAT IT’S A MORE PALATABLE POLITICAL STRATEGY TO “DELAY,” RATHER THAN DEFUND.

You understand, don’t you, that the “continuing resolution” only lasts for, at most, one year? Under ordinary circumstances, limitations on funding contained in the CR expire at the end of the year, unless they are renewed — and there is considerable legislative momentum to do so. You can have a permanent restriction on the CR (although the rules would have to be waived to do so), but no one’s insisting on that.

So, for the people who are arguing for “delay” on the grounds that “defunding” is unachievable, here’s some news: Your major option would be exactly the same language as Cruz-Lee.

MYTH #3: THAT OBAMA IS “SALIVATING” OVER THE CHANCE TO BLAME REPUBLICANS FOR SHUTTING DOWN THE GOVERNMENT.

And how do we know that? Answer: Because Obama told us so, in leaks to the sycophant media.

Which leads to this question: If Obama and the liberals are so convinced that Republicans would destroy themselves by defunding ObamaCare, why would they not want them to do so?

Instead, Obama’s allies are frantically fighting the Lee-Cruz option. This should tell you something about how they really feel.

MYTH #4: THAT OBAMA WOULD NEVER SIGN SUCH A BILL DEFUNDING OBAMACARE, HIS “SIGNATURE INITIATIVE.”

There is every evidence that the roll-in for the exchanges (beginning October 1) and, hence the mandate, are going to be excruciating for enough Americans to constitute a political tsunami.

In New Hampshire, where there is only one company on the exchange, the state’s largest newspaper let slip that the cheapest policy would be $398 a month. Thus, for a new graduate earning $35,000 (saddled with debt and earning too much to get any significant subsidy) this would constitute one-seventh of his or her income – for a “transfer payment” he or she will never use.

HHS has bragged that young people in selected places can get CATASTROPHIC policies — which they will never, ever use — for a “mere” $1,200 a year. Of course, this is like taking $1,200 of your meager income and burning it.

And all of this will be revealed on the day (October 1) that the new fiscal year begins.

Take into consideration, particularly given the configuration of the 2014 Senate races, that the GOP would not require every American to hate ObamaCare. If only one-third loathed it, this would be politically transformational.

Already, 20 House Democrats have defected on postponing the individual mandate. And, if it gets messy, they will be beating down the door to Obama’s office.

MYTH #5: THAT FORCING A CONFRONTATION ON THE CR WOULD SHUT DOWN THE GOVERNMENT, BUT ALLOW OBAMACARE TO CONTINUE DURING THE SHUTDOWN.

This is not true on either count.

Since Reagan’s second term, the Justice Department’s Office of Legal Counsel and the Office of Management and Budget have promulgated guidance allowing most of the desirable discretionary functions of government and virtually all of the entitlements to continue as “essential functions,” even with no CR.

Furthermore, if the House really wants to chime in on keeping Social Security, air traffic controllers, national parks, etc., it can pass a bill stating that these are essential functions which will not be interrupted. Thus, their continuation pursuant to Article I, Section 9, and the Antideficiency Act will be in accordance with the “law.”

CRS concedes that the $1 billion of previously appropriated funds to the Health Insurance Reform Implementation Fund (HIRIF) that has previously been used to fund the IRS “would be obligated by the end of FY 2012.” IRS enforcement of the mandate is not a “nonrecurring expense” which can be funded from a fund for that purpose, cannot be funded by any trust fund established under ObamaCare, and, at a cost of $400 million, is too large to be legally reprogrammed from another account.

Finally, the Antideficiency Act has been interpreted, without a CR, to prohibit “all audit functions, examination of returns, and processing of non-electronic tax returns that did not include remittances…” [CRS p.8]

The CRS argues that the IRS would just start levying penalties once Republicans capitulated.

ANSWER: Don’t capitulate. If Congress succeeds in prohibiting funds for the mandate, the answer is “no,” the IRS will not be able to enforce the mandate for the duration of the CR.

MYTH # 6: THAT THE PROBLEM WOULD BE SOLVED BY A 60-TO-75-DAY CR THAT WOULD POSTPONE THE DEBATE UNTIL “EARLY- TO MID-NOVEMBER.”

Which leads to these questions, “Can you add?” and “Do you think we can’t?”

But a 75-day CR expires on December 14, which opens the door for the strategy of forcing capitulation by threatening to take away Congress’ Christmas vacation.

MYTH #7: THAT REPUBLICANS HAVE LOST EVERY BUDGET “SHOW DOWN FIGHT” THAT THEY HAVE SERIOUSLY WAGED.

In 1995-6 House Speaker Newt Gingrich was unapologetic about his desire to shut down the government in order to achieve a balanced budget.

The public turned against Gingrich only after he cowered. The GOP picked up three seats in the Senate. It retained control of the House with 227 seats and lost only three. Clinton would have been ousted had Republicans not nominated a stand-for-nothing nasty old man as their candidate. And the negotiations springing from that conflict produced a balanced budget and fiscal austerity. It was the most successful legislative strategy in our lifetime.

The second most successful strategy was in July 2011, when conservatives — holding back the GOP leadership — stalled the debt limit for a month. Obama’s poll numbers went down 10 points and, although not our preference, the impasse-related sequestration is being lauded by the stand-for-nothings as the only successful thing Congress has done.

MYTH #8: THAT “EVEN THE DEFUND RINGLEADERS ADMIT — AT LEAST IN PRIVATE — THAT THIS FIGHT ISN’T GOING TO END WITH A DEFUNDED LAW.”

Speak for yourself, Tonto!

The “gun lobby,” of which I am a part of, just beat back an Obama gun control initiative while every major institution in America (including the Murdoch empire) — pronounced doom upon us. Similarly, we waded into the immigration battle, and that Obama “sure thing” is now in question. In July, 2011, I was in the middle of the fight over the debt limit, and, during the month in which we stalled a Republican leadership cave-in, Obama’s numbers went down 10 points.

So, spare me the hopeless cringing of the “coward wing” of the conservative movement. They have done us more damage than MSNBC.

MYTH #9: THAT AS THE “DELAY” FACTION ARGUES, “IF AND WHEN A DEFUND BILL FAILS TO PROCEED IN HARRY REID’S SENATE, REPUBLICANS NEED A SAVVY AND PROACTIVE ALTERNATIVE TO SHUTDOWN.”

For the last three years, I have been pushing for Senate GOP leaders to introduce a mandate repeal, move it onto the calendar under Rule XIV, and move to proceed to it. I have prolonged discussions with DeMint’s top guru about how to grab the floor in a minute where no preemptive motion to proceed is pending.

And during that time, I have seen no indication of anyone else pushing to force the issue to the Senate floor with any strategy, savvy or otherwise.

MYTH #10: THAT OBAMACARE IS INEVITABLE BECAUSE “A DEMOCRAT-CONTROLLED SENATE…IS UNLIKELY TO PASS ANY LEGISLATION BLOCKING FUNDING, AND OBAMA WON’T SIGN ANY MEASURE THAT DOES SO.”

If there is no CR, the CRS, DOJ, and OMB opinions state that IRS can’t enforce the mandate.

House Republicans just need to stay firm in opposition to approving any CR that funds the mandate. All that will take is 117 votes, plus observance of the Hastert Rule.

There will be one of two outcomes: Either Obama and Reid will relent on their principles, or the House Republicans will.

The question is: If ObamaCare becomes a reality because Obama is firm on his principles — and Republicans don’t care about theirs — what will that tell the GOP base in 2014 and 2016?

Colorado Recall Coming Down to the Wire