Gun owners of America is proud to endorse Big Dan Rodimer to represent Nevada’s Third District in the United States House of Representatives.

His opponent, “Gun Ban” Dan Schwartz is coming for your rights. Just listen to him talk about respecting the Second Amendment but wanting to take away your so-called “assault weapons.”

Nevadans deserve a Congressman like Big Dan Rodimer who represents their constitutional values.

Dan Rodimer will be that Congressman.

He is a strong conservative who values the Constitution. That is why Gun Owners of America is convinced that Big Dan is the right candidate for the job.

GOA is looking forward to welcoming Dan to Washington D.C. as a “big” ally of the Second Amendment in the United States House of Representatives, but he needs your help.

Together, we can help Big Dan, whether it be by volunteering for his campaign, displaying a yard sign, or making a financial contribution to Rodimer for Congress.

Gun Owners of America encourages you to get out and protect your Second Amendment-protected rights by voting for the most pro-gun candidate in the Republican primary—Big Dan Rodimer—on June 9th.

And please go the extra mile and get your pro-gun friends and families to the polls too! 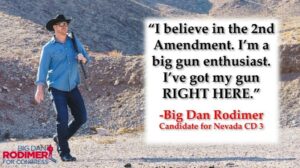 Please consider chipping in $25, $50, or $100 so GOA can keep up the pressure in important races across the country.

Protect Our Cities With Constitutional Carry