Urge Your Representative to Send Permitless Carry to the Governor!

Click on the TAKE ACTION button to encourage your state Representative to vote for the Senate-passed version of Constitutional Carry (HB 786).

There’s not much time left in the legislative session in Jackson. 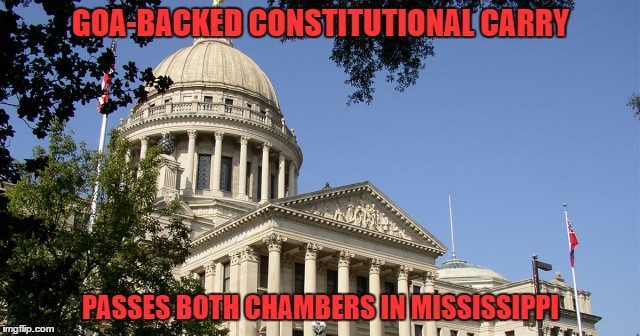 So please take action right away!

The bill (HB 786) started as a mere church security bill to allow concealed carry permit holders to carry in church.

It was amended in the house to include Constitutional Carry — enabling law-abiding citizens to carry firearms in a “sheath, belt holster or shoulder holster” without getting permission.  The bill was then sent to the senate.

Having arrived there, HB 786 was expanded yet again to include a provision nullifying many types of Obama gun control.

The bill passed overwhelmingly — by a 36-14 vote in the senate — and now goes back to the house.

Given that the bill was favorably improved in the senate, we are asking state representatives to take the senate version … pass it … and send it to the Governor for his signature.

There’s not much time.  So please click here and urge your state representative to vote for the senate-passed version of HB 786.