ACTION: Click here to contact your Representative right now. Tell him or her to vote YES on the Meadows resolution to vacate the Chair (House Resolution 385).

Congressman Meadows throws down the gauntlet!

Will your congressman do the right thing?

Congressman Mark Meadows of North Carolina is putting his political career on the line, sponsoring a resolution to “vacate the chair” that would fire Boehner as Speaker.

It’s imperative that you contact your member of Congress right now and tell him or her to vote YES on the Meadows measure (House Resolution 385). 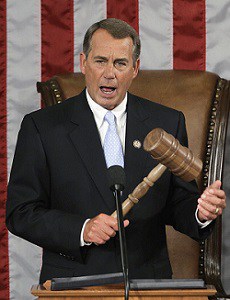 Even worse, Boehner is open to allowing votes on Obama’s anti-gun agenda.

As long as John Boehner is Speaker, your gun rights are in danger.

After all, remember in spring of 2013, when the pro-gun community was engulfed in the “battle of the century” over the Bloomberg/Obama gun control agenda?

John Boehner could have nipped gun control in the bud by pronouncing that gun control would be “dead on arrival” in the House.

Instead, he said that the “House will consider” any gun control proposals sent over by the Senate.

Shortly after that, when anti-gun amnesty passed the Senate, Boehner said that he was “[expletive deleted] bent” on passing amnesty — which would legalize millions of anti-gun voters who broke the law to get here.

The only reason this bill didn’t pass is that GOA worked with House members to kill the bill on procedural grounds.

Then there’s the failure to fight the anti-gun ObamaCare law. Sure, Boehner has scheduled dozens of useless votes. But he has persistently opposed fighting ObamaCare using the “power of the purse” — the only strategy with any hope of curtailing the anti-gun program.

And don’t forget last year’s “Cromnibus,” which funded virtually all of the Obama’s anti-gun actions. GOA encouraged congressmen to vote against the bill, and we almost won.

The only reason we didn’t win is that according to one whistleblower — Rep. Marlin Stutzman — the House Speaker lied to Congressmen about what would be in the measure, and that was the only reason Boehner was able to secure the votes of several conservatives and salvage the anti-gun bill.

Most recently, when GOP congressmen dared to follow GOA’s advice and vote against an anti-gun trade deal, Boehner lashed out by stripping committee leaders of their posts.

So here’s the deal: If just 30 Republicans side with Democrats against Boehner, he could be fired.

The good news is the Speaker must get a majority vote, which blocks Nancy Pelosi from seizing power.

If the Meadows resolution fails, Boehner will remain as Speaker.

If the Meadows resolution succeeds, a more conservative Republican will become Speaker.

Your member of Congress could be the deciding vote.

And your gun rights hang in the balance.

ACTION: Click here to contact your Representative right now. Tell him or her to vote YES on the Meadows resolution to vacate the Chair (House Resolution 385).

Constitutional Carry Could Come up for Veto Override