— Today is the last day for submitting comments

Several weeks ago, GOA alerted you about the State Department’s proposed arms control regulations — a rewrite which has been widely cited as an attempt to control gun-related speech on the Internet.

GOA believes that there is a real reason to be concerned about the implications of these regulations for gun-related Internet speech.

GOA has prepared comments for the State Department in opposition to these regulations — comments that will be posted on the internet later.

But you can now see a detailed analysis of the regs by GOA’s Legislative Counsel here. 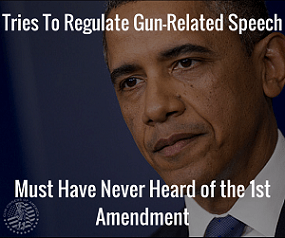 Bottom line: These proposed regulations would define an arms “export” — which would require State Department permission and substantial fee — to potentially include any gun-related communication on the Internet or social media.

With this final keystone in place, the Obama administration would have the regulatory framework to comprehensively regulate gun-related speech in cyberspace, to whatever extent it desires.

And those who violate this restriction on Internet “speech” are in danger of facing decades in prison (up to 20 years) and massive fines (up to $1 million).

It is imperative that Americans rise up in opposition to it. We’ve backed the President down before so that he’s pulled proposed regulations. (Remember the proposed ban on M855 ammo?)

But if the President persists and does not withdraw these regulations — despite the outpouring of opposition from gun owners around the nation — then we’ll work through the Congress to repeal/defund them on the annual funding bill.

There’s a lot of work still to be done. Please stay tuned … and take action!

ACTION: If you haven’t done so already, please write the State Department by going here. Tell them that you oppose the proposed arms control regulations. You can see a proposed letter at the bottom of the webpage here.