— Ask your Senators to filibuster until Reid allows their amendments

At the core of their slimy scheme is a do-nothing bill being pushed as the Sportsmen’s Act (S. 2363).  North Carolina’s Kay Hagan, who voted FOR the universal gun registry bill, is the chief sponsor.

Other chief cosponsors are Mary Landrieu (who also voted for universal gun registration) and Mark Begich and Mark Pryor (who, according to Harry Reid’s staff, would have cast the deciding votes for that universal gun registry bill, had their votes been needed).  It’s also cosponsored by anti-gun leader Joe Manchin (D-WV).

The Sportsmen’s Act is, substantively, largely a “nothing-burger.”  People could hunt on federal lands — unless Obama didn’t want them to.  Dedicated funds (from the Pittman-Robertson tax) could be used for ranges — but don’t have to be, and probably wouldn’t be. 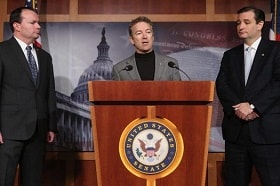 Moreover, Section 107(b)(4)(B) of the bill says that the BLM or Forest Service can close down federal public lands that can be used for hunting and recreational purposes for a host of reasons, including “public safety.”  Anyone want to bet that these agencies won’t find reasons to do so?

But the bill’s not about substance.  It’s about reelecting its anti-gun sponsors — virtually all of them red-state Democrats who face tough reelection battles in pro-gun states.  This, incidentally, is the same bill that was used to reelect Montana’s Jon Tester (D).  And, although he pretended to be “pro-gun” before the election, after the election, Tester was the Second Amendment’s worst enemy.

The good news is this:  Senators Mike Lee (R-UT), Rand Paul (R-KY) and Ted Cruz (R-TX) are prepared to offer genuine pro-gun amendments to this bill — like defunding Operation Choke Point and more.

But here’s the problem:  Anti-gun Senator Harry Reid will try to use a procedural tactic called an “amendment tree” to block Lee, Paul, and Cruz from offering any pro-gun amendments.

These pro-gun Senators want to offer good amendments like concealed carry reciprocity, but that won’t be possible if Harry Reid blocks their ability to offer pro-gun amendments with an “amendment tree.”

And the reason is clear:  Genuine pro-gun amendments would put anti-gun senators like Hagan, Pryor, Landrieu, and Begich on the spot.  It would reveal that their sponsorship of this “nothing-burger” bill doesn’t mean that they are “pro-gun,” but rather that they are anti-gun frauds.

But in order to retain Paul, Lee, and Cruz’ right to offer pro-gun amendments, Republicans will have to block Reid’s efforts to shut down their filibuster of the bill and the motion to proceed to it — until Reid commits to dismantle his “amendment tree” and allow them to offer their amendments.

In other words, we need to say to Reid:  No pro-gun amendments = no fake bill.