What if Heller had never been decided?

GOA Helps Celebrate the Ten-Year Anniversary of the Heller Decision

What if the Heller case of 2008 had never been decided? 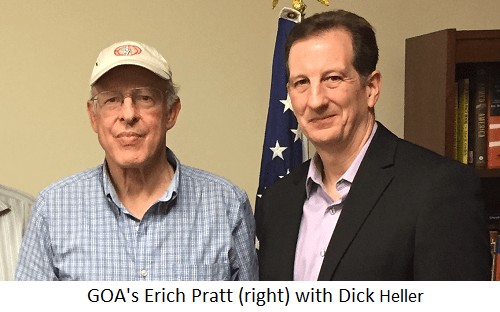 Quite possibly, the gun rights we enjoy today would look much different.

This is a topic I will be addressing tomorrow in front of the Supreme Court — as I join Dick Heller, the lead plaintiff in that landmark case.

GOA will be helping Heller celebrate the ten-year anniversary of that momentous decision which bears his name.

But more on that below.

On more immediate matters, have you voiced your opposition to ATF’s back-door ban on AR-15s?

If not, please click here to submit your comments to the ATF, telling them that their proposed rule is fatally flawed, and will lead to a ban on semi-automatics, in addition to the existing ban on bump stocks.

Thanks to your activism and support, the media has recognized that GOA is the leading force that is opposing the ATF bump stock ban. 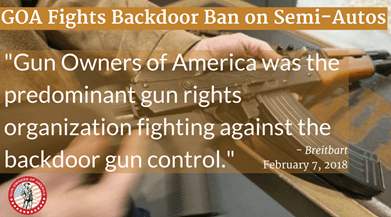 But to be clear, this ban is merely a Trojan Horse for additional restrictions on AR-15s and other semi-automatic rifles.

You can read the comments filed by Gun Owners of America and Gun Owners Foundation here and here.

Again, if you have not expressed your opposition to the ATF, you can do so here. You have until the end of the day on Wednesday, June 27.

What if Heller had never been decided?

Because it was on that day — ten years ago — that the highest court in our land recognized the individual right of decent people to own a firearm for protection.

GOA submitted a hard-hitting amicus brief to the Supreme Court prior to the decision.

In fact, after looking at all the briefs which were submitted in the Heller case, the editors at USA Today decided to use GOA for their “Opposing Voice” in March, 2008.

The paper’s editors told our attorneys that GOA had an argument that was clearly distinctive, as were the only ones to argue that the words “shall not be infringed” invalidated all federal gun control laws.

As a GOA activist, you know that those words have been the guiding theme for us at Gun Owners of America.

Resisting Tyranny is central to the Second Amendment

But that’s not the only reason the GOA brief was so hard-hitting.

Our brief also presented the greatest reason for the right to keep and bear arms, stating that “the Second Amendment right is to be exercised as a last resort to guard against tyranny.” 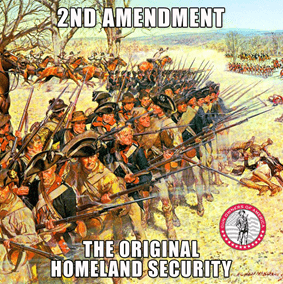 You can imagine our delight when we saw the Supreme Court echo this concept on pages 24-25 of the Heller decision.

The Court said that when the citizens of a nation are armed, “they are better able to resist tyranny.”

The pages of our own history clearly show this to be true.

The battle to reclaim our freedoms is not over

The Heller decision set in motion a series of events that eventually resulted in several gun bans being repealed or struck down from coast-to-coast.

And, of course, the Heller decision was instrumental in setting the table for the McDonald decision in 2010 — a decision that made it clear that states and localities are NOT at liberty to infringe upon a fundamental liberty such as the right to keep and bear arms.

Obviously, Heller was not the end of the fight. There are still many judges who are ignoring the Heller decision and who, quite frankly, ignore the Second Amendment, as well.

And so we continue to fight for our freedoms — in the courts … in the Congress … and in state legislatures across the country.

That’s why I’m so glad that you have chosen to fight alongside of GOA.

Thank you for your activism and support of Gun Owners of America.

P.S. Our best chance of defeating the bump stock/AR-15 ban is by overwhelming the administration with comments in opposition. So please click on the “Speak Up Now” button below and take action today. And if you’ve let your membership lapse, make sure to renew your membership in Gun Owners of America today for only $20!

10 Years Later: How This Landmark SCOTUS Case Set The Stage For Gun Rights In America