Shaneen Allen Reminds Us Why We Need Concealed Carry Reciprocity

Written by Gun Owners of America Published: 15 May 2015

ACTION: Click here to urge your Representative and Senators to cosponsor legislation establishing concealed carry reciprocity. Even if they’ve cosponsored other similar bills, they need to cosponsor the Cornyn-Stutzman legislation because it’s the ONLY one that protects citizens from Constitutional Carry states.

Remember Shaneen Allen? She was the Philadelphia mother of two who was arrested for having a gun in her car while in New Jersey. 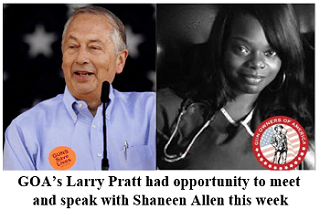 Despite being a permit holder in Pennsylvania, she was run through “legal hell” because New Jersey refuses reciprocity with its neighboring state.

She was finally given a full pardon by New Jersey Governor Chris Christie last month, but her arrest record has kept her from working for two years.

She has paid a high price for exercising her right to keep and bear arms.

Shaneen’s story highlights why we need the Cornyn-Stutzman reciprocity bill, and why we need to protect the right of Americans to carry from one state into another.

There are other reciprocity bills in the Congress, but ONLY the Cornyn-Stutzman reciprocity bills (S. 498 & H.R. 923) would allow Americans from CONSTITUTIONAL CARRY states to tote firearms nationally without any permit.

To adopt any other legislation would discourage states from adopting their own permitless carry laws. Thankfully, Constitutional Carry is on the move — with the Kansas Governor being the most recent one to sign GOA-backed legislation (in April).

But Congress should not pass legislation that discourages other states from emulating what Kansas just did.

To be clear, the Cornyn-Stutzman legislation does NOT create a “national permit” or “national registration” scheme, as some have mistakenly alleged.

To the contrary, this legislation ENCOURAGES states to pass constitutional carry laws which will recognize the right of citizens to carry WITHOUT permits or licenses.

Think about it: The prospects of allowing Alaskans or Arizonans to carry in New York City — or anywhere else they want — without a permit is one of the most effective advancements for Second Amendment values which we could enact.

Some have wondered if reciprocity legislation would serve as a Trojan Horse bill which allows the federal government to sneak in additional gun control restrictions.

Absolutely not! Does anyone really think Chuck Schumer needs a pro-gun bill to try and advance his gun control agenda?

To the contrary, the only “Trojan Horse” with this bill will be the Americans (from constitutional carry states) who can carry, without a permit, in other states where the local citizens have been stripped of their Second Amendment rights (as in New York City).

Ultimately, the “locals” in these anti-gun jurisdictions are going to look around and ask themselves “Why can that guy (from out-of-state) protect his family, and not me?”

We are the ones with the Constitution and the law on our side. That much was made clear by the McDonald v. Chicago decision in 2010, when the Supreme Court stated Congress does have power, under the 14th Amendment, to protect American citizens who are having their gun rights violated by states and localities.

ACTION: Urge your Representative and Senators to cosponsor legislation establishing concealed carry reciprocity (S. 498 & H.R. 923). Even if they’ve cosponsored other similar bills, they need to cosponsor the Cornyn-Stutzman legislation because it’s the ONLY one that protects citizens from Constitutional Carry states.