Supreme Court to Consider Taking Up GOA-backed Case this Friday

“New Jersey [treats] firearm possession as a privilege granted by the civil authorities [and this] is in no way consistent with the inherent right to keep and bear arms vested in the People.” — Gun Owners of America’s legal brief before the U.S. Supreme Court in Drake v. Jerejian

There’s news about an important amicus brief that Gun Owners of America has before the U.S. Supreme Court.  We’ll get to that below.

But first, you might be interested to know that Michael Bloomberg’s Everytown.org made a video that attacks your GOA Executive Director Larry Pratt and the NRA.

The ad mocks Pratt for saying things like, “There’s no victory until we get guns in school to protect ourselves.”

Bloomberg recently announced that he would be spending $50 million to get his anti-gun agenda enacted around the country. 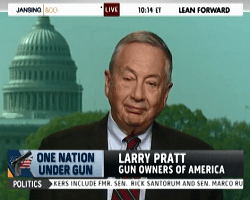 But this attack campaign comes right out of Saul Alinsky’s Rules for Radicals. Rule #13 says:  “Pick the target, freeze it, personalize it, and polarize it….”

Ironically, Bloomberg’s Everytown.org has set up their YouTube page to disallow any comments about the video.  So go ahead and view the ad on GOA’s Facebook page here and tell them what you think!

Larry Pratt went into the lion’s den on Friday to debate gun rights and concealed carry.

You can check out the MSNBC debate for yourself, where he absolutely left the talk show host fumbling for words!

Here’s just a sampling of what many gun owners are saying on GOA’s Facebook page:

* “Mr. Pratt was the only one making any sense. The other two were clearly ‘unarmed.’”

Other GOA representatives have been in the news lately, including:

* And Director of Communications Erich Pratt spoke out against ATF registration of firearms, and blasted both Michael Bloomberg and Justice John Paul Stevens for their “idiotic ideas” on the Second Amendment.

Now to the legal news.

U.S. Supreme Court could agree this week to take up gun case

Gun Owners of America has alerted you in the past to our involvement in Drake v. Jerejian — a case which is currently before the U.S. Supreme Court.

Press reports indicate the Court could be meeting in a private conference this Friday, May 2, to determine whether Justices will choose to hear this case.

The controversy centers around John M. Drake, an ordinary citizen who was denied his right to carry a handgun concealed.

In New Jersey, carry permits are like honest politicians — they are rumored to exist, but few have ever actually been seen. An ordinary person may be granted a permit only if he can prove to the satisfaction of a judge that his life is in grave danger.

But GOA’s amicus brief argues that the Garden State’s law is unconstitutional, and reminds the Justices that our God-given rights should NOT be treated as government-issued privileges.

The U.S. Supreme Court has not yet decided on whether to take up this case — in fact, it has remained silent on this issue over the past two weeks.

But according to Reason.com, this could very well be a sign that at least one Justice on the Court wants this case to be heard:

The Supreme Court rejects the vast majority of petitions it receives each year (the acceptance rate is around 2 percent). That Drake keeps kicking around suggests somebody on the Court has taken a serious interest in hearing the case and is pushing for extra consideration among the nine members before a final vote is held on whether or not to accept it.

Supposedly, Justice Antonin Scalia is trying to round up 5 votes on the Court.

And interested gun owners can help contribute to this case — and others like it — by entering a desired dollar amount here.