As you know, Gun Owners of America has been fighting the ATF’s bump stock ban in the courts. 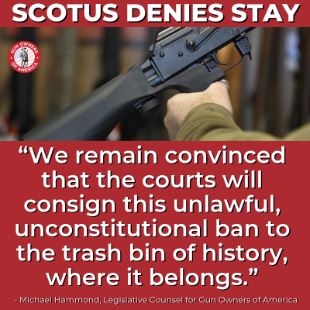 But given that the turn-in period for bump stocks ended this past Monday, GOA sought an emergency stay from the U.S. Supreme Court.

Sadly, on Thursday, the Supreme Court refused to halt the enforcement of the ATF’s bump stock ban.

Our challenge is still alive and well, however, in the lower courts.

Certainly, GOA cannot advocate that its members violate the law. And yet we predict, given our experience with nine states with similar bans, that a large majority of the 500,000 bump stock owners will refuse to turn in their property in what they view as an illegal, unconstitutional gun grab.

The ATF regulations define bump stocks as “machineguns” and seriously implicate the right to own AR-15’s and many other semi-automatic firearms, as we have explained in past alerts.

GOA will continue to fight the issue in the court system, as the case now returns to the lower courts.

And we remain convinced that the courts will consign this unlawful, unconstitutional ban to the trash bin of history, where it belongs.

Please stay tuned for further updates on this.

In the Senate this week, Judiciary Chairman Lindsey Graham packed a panel appearing before his committee that was almost entirely supportive of all-out gun confiscation.

Not surprisingly, Graham refused to announce his witness list until 24 hours before the hearing. And he refused to allow other Republican senators to have any input. 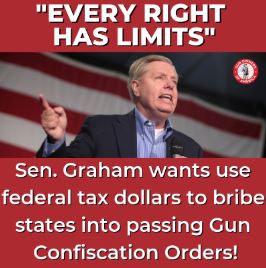 Then he paraded before the American people a carnival of gun-hating fools — complete with a sign-waving demonstrator and a bench of Democrats proclaiming that gun confiscation wasn’t nearly enough for them.

That said, for all of his efforts, it appears to us that Graham lacks the votes right now to pass any of the “red flag” gun confiscation bills that have been introduced.

No doubt, this is in large part to the TREMENDOUS outpouring of emails, postcards and phone calls that Senators have been receiving from GOA members.

Reports indicate that Senators have received tens of thousands of these contacts. And part of this includes responses that have been generated from radio ads that GOA has run in key districts.

Iowa is one of the states where GOA has mobilized considerable numbers of gun owners.

And to his credit, former Judiciary Chairman Chuck Grassley (R-Iowa) responded well and offered the best line of questioning against red flag laws during the hearing.

One of the witnesses, David Kopel of the Independence Institute, laid out at least five unconstitutional aspects of state red flag bills that would have to be addressed before they could be assured of passing judicial muster.

So far, none of the 14 states with red flag gun confiscation programs would qualify to get federal funding under the two Senate bills which have been introduced this year (S. 7 and S. 506).

For starters, none of these “red flag” states provide any due process protections before confiscating people’s guns.

Moreover, since none of the 14 states are likely to change their current laws, it would appear to be metaphysically impossible to inject due process into the state-funding legislation.

This is a surprisingly good position for us to be in, but the battle is far from over.  We need to keep the heat on Senators.

So please make sure to contact your Senators (above) and encourage them to OPPOSE S. 7 and S. 506.