Will the Next Surgeon General be an Anti-gun Fanatic?

Will the Next Surgeon General be an Anti-gun Fanatic?

Earlier this week, Senators grilled the latest anti-gun nominee that President Obama has put forward:  Dr. Vivek Murthy, who was nominated to be the next Surgeon General of the United States.

Make no mistake about it:  Murthy is an anti-gun fanatic.   Not only that, as Surgeon General, Murthy could channel huge amounts of taxpayer dollars to “junk science studies” intended to prove that guns should be banned. 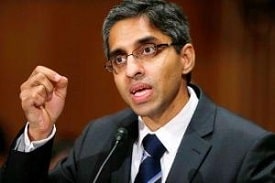 During his hearing this week, Murthy alleged that gun control would not be his “priority.”  But he did not say he would not spend money on something he is already on record as characterizing as a “health issue.”  (See examples of his intense anti-gun views below.)

Also, don’t forget Justice Sonia Sotomayor, who gave us all of these promises of neutrality and then, when confirmed, couldn’t brace gun control fast enough.  Senators should not make the same mistake with Murthy.

It appears the Murthy nomination is a central component to the new strategy of Bloomberg-type groups to use junk science produced with taxpayer dollars to discourage gun ownership.   See the article that discusses this strategy here.

Murthy is co-founder and president of Doctors for America, an Obama-linked organization which has gone to great lengths to push gun control.  Both Murthy’s personal assistant and press secretary are fellows at a Leftist “think tank” supported by financier George Soros.

The Twitter feed of @vivek_murthy leaves no doubt about how eager the Obama nominee is to restrict gun rights.

After the shooting in Newtown, Murthy’s group authored an open letter to Obama that urged restrictions on gun rights in the name of the medical profession, stating:

It’s time for common sense gun rules like background checks and banning assault weapons and high-capacity magazines, as well as a comprehensive plan to address gun violence including ensuring funding for research and data-collection on gun violence and ensuring that health care providers can ask patients about gun ownership in order to counsel them appropriately about safety measures.

For all the foregoing reasons, Gun Owners of America OPPOSES the nomination of Vivek Murthy to be Surgeon General of the United States and will score Senate votes in favor of his nomination as anti-Second Amendment votes.

Gun Control: A War Not a Conversation