“Democrat control of Congress bodes well for oppressive gun laws, [and] a huge influx of newly legal voters from cultures where draconian government control over private firearm ownership is an unquestioned matter [helps]. Bloomberg can hardly be unaware of that.” — The Examiner, January 29, 2014

The good thing about anti-gun liberals in Washington is that they are pathologically incapable of keeping their mouths shut.

And, this morning, shortly before 9:00, MSNBC commentator Dick Gregory announced that House Speaker John Boehner, the day before, had told a private meeting of reporters that he had been talking with Barack Obama “a lot” about pushing immigration reform.

It’s pretty clear why Barack Obama wants a bill which would either legalize or grant citizenship to as many as 11.5 million people who, according to Latinos expressing their opinions in a Pew poll, would cast 88% of their votes for liberals like Barack Obama. 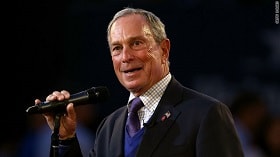 It’s also clear what Speaker Boehner has in mind:  If he sabotages his own party, the liberal media will throw him a “doggie treat.”

But, for other House Republicans, the advantage of having an Obama/Boehner knife in their back is a little less clear.

A note on why gun owners have “skin” in the immigration game: By turning a net 8,000,000 people into an “Obama army,” even “legalization” without immediate citizenship would fundamentally change electoral politics for the 2014 elections.

This is why, along with gun control, former New York Mayor Michael Bloomberg has made immigration “reform” his central priority.

The anti-gun Bloomberg knows that “legalization” of persons unlawfully in the U.S. will create an “Obama army” which will transform the 2014 elections and achieve the almost impossible task of delivering the House and the Senate to the party of gun control.

With Nancy Pelosi and Harry Reid in power in 2015, the “Obama army” will then get their “citizenship” reward — and gun control will advance.

This “Obama army” has already made several appearances:

Remember how, in November, children of illegals ambushed House Speaker John Boehner in a local diner over breakfast?

Remember how a mob of pro-amnesty spectators turned the U.S. Senate into a pep rally last June by chanting Obama’s campaign slogan, “Yes we can,” from the Senate gallery?

Remember how Bloomberg orchestrated out-of-state agitators who descended on the town hall meetings of Senators like Kelly Ayotte and Jeff Flake in order to demand gun control last Spring?

Multiply this by a million, and you will understand the ramifications of giving Obama an anti-gun army, going into the 2014 elections.

ACTION: Contact your Congressman. Tell him to stand up to House Speaker John Boehner at this weekend’s “retreat” and to oppose the creation of an “Obama army.” There are separate letters for Republican and Democrat Congressmen.  Based on your zip code, the correct letter will be automatically selected.