{flike}
“Erich Pratt, spokesman for the group Gun Owners of America, [argued] that background checks wouldn’t stop determined killers from getting their hands on guns and pointed to contrary polling showing that Americans are wary of increased gun restrictions.” — The Hill, December 11, 2013
Tomorrow marks the one-year anniversary of the Sandy Hook shooting.
Americans all over the country grieved when 26 precious lives were ended way too early by the actions of a murderous thug.
But in a shameless effort at politicizing a tragedy, our President has used the ensuing months as an opportunity to attack gun owners and the Second Amendment.
“Never let a serious crisis go to waste,” the President’s former chief of staff, Rahm Emmanuel, used to say.  And exploitation of a calamity is precisely what President Obama did this past year — with, of course, much help from the liberal media.
Since the shooting last year, Gun Owners of America has spent thousands upon thousands of hours debating anti-gun spokesmen … lobbying Congress … and blanketing the airwaves with a hard-hitting, pro-gun message.
Some of the more notable media events occurred shortly after the Sandy Hook shooting: 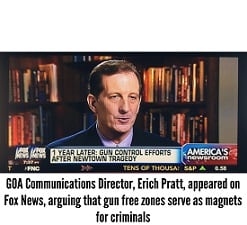 * In two very famous interviews, GOA’s Executive Director Larry Pratt went mano-a-mano with CNN’s Piers Morgan — which you can view here and here.
One reporter said Pratt calmly and rationally took “the arrogant British host completely apart” and debunked every “tired liberal claim” about gun control.
* And then GOA’s Director of Communications went toe-to-toe with Andrea Mitchell of MSNBC in an intense debate over the President’s gun control agenda which you can view here.
After the firefight, GOA’s Facebook lit up with comments that ranged from “Erich Pratt owned her” to “She got schooled” to “I’m so pleased I rejoined GOA.”
Well, you can also share in the same joy as the above gun owner:
1) You can rejoin GOA here;
2) And you help increase YOUR CLOUT in Washington by giving a gift membership to a friend or family member here.
The opportunities to educate the public in the media haven’t stopped.
Gun Owners of America has run in the Fox News cycle all day today and is scheduled to have a spokesman on Chris Wallace’s show this Sunday.
What have we learned in the past year?
If there’s bad news to share, it’s that Congress hasn’t fixed the underlying problems which turn many areas of our nation into soft targets for criminals.
Our schools are still gun free zones … military personnel still can’t carry firearms at work … and it’s just a matter of time before another determined psycho steals a gun and goes on a rampage in a gun free zone.
But if there’s good news, it’s that the truth is winning out — and we are seeing this in many ways:
1. Good guys with guns are saving lives.
One week prior to the Newtown tragedy last December, a concealed carry permit holder stopped the shooter at the Clackamas Mall in Oregon.  While the killer had stolen an AR-15, he was stopped when Nick Meli pointed his gun at him.  (The killer then retreated and took his own life.)
Universal background checks would have done NOTHING to stop either killer in Oregon or Connecticut.  Both men stole their weapons.  The only difference — the key difference — is that, in Oregon, there was a good guy with a gun!
2. CDC confirms that guns save lives.
After being commissioned by the President to study “gun violence” earlier this year, the Centers for Disease Control found that guns are used more often to save life than to kill, “with estimates of annual [defensive gun] uses ranging from about 500,000 to more than 3 million per year.”  (June 2013)
Because there are roughly 30,000 gun deaths every year (by murder, suicide and accident), this means that guns are used in this country anywhere from 16-to-100 times for often in self-defense.
3. Police agree that guns save lives.
A poll of more than 15,000 police officers this year showed that the rank-and-file cop on the beat is EXTREMELY pro-gun:
* 80% feel that legally-armed citizens would likely have reduced the number of casualties in recent mass shootings; and
* 81.3% support arming teachers and/or school administrators who volunteer to carry at their schools. (March 2013)
4. States eliminating gun free zones.
While some states jerked to the left this year after the Sandy Hook shooting, there were many states that took the opportunity to pursue freedom.  For example, several states:
* Repealed gun free zones in restaurants (that serve alcohol), in churches, and other places that drive the gun grabbers crazy;
* Began authorizing teachers in several school districts to carry guns for the protection of students; and,
* Took steps to nullify federal laws within the state (specifically, Alaska and Kansas).
Fox News reported today that, since Newtown, almost twice as many pro-gun laws that loosen restrictions on guns — as compared to toughening them — have been enacted in states across the nation.
5. Gun control kills … political careers.
Seizing the opportunity to eviscerate the Second Amendment, Colorado passed a series of gun control restrictions this Spring.
But the resulting recall of two anti-gun state senators — and the forced retirement of a third — has sent chills down the collective spine of gun grabbers across the country:
“What happened in Colorado should send shock waves through every legislator’s heart that’s been supportive of gun control.”  That’s what GOA’s Erich Pratt told Reuters on Wednesday.
But we’re not the only one making this point.  The liberal newspaper in the nation’s capital, The Hill, ran a headline on that same day which blared:  “One year after Newtown killings, gun control proponents feel dejected.”
What lies ahead.
As we warned you last month, gun grabbers inside the nation’s capital have already tried to jumpstart the gun control issue as it memorializes the tragic Sandy Hook shooting.
But GOA has not been silent.  You can find us on the web … on Facebook … and on InstaGram.
Plus, don’t forget to catch Larry Pratt’s NewsHour show, where you can listen to online archives, as well.
As we move into 2014, we will continue rallying the troops to keep the heat on Congress.
For now, as Christmas approaches, we hope that you will consider gifting a GOA membership to your family and friends, so that we will increase our voice in Washington.
We need you — and them — in the fight!