Urge your Congressman to oppose these efforts!

“Gun Owners of America (GOA) also took a shot at the [plastic gun ban], saying it didn’t trust President Obama with new powers.  ‘The poorly drafted law has always been an anti-gun time bomb waiting to explode in the hands of an anti-gun president — which we now have,’ the group said.” — The Washington Times, December 2, 2013

The Senate had just passed, by unanimous consent, the House’s ten-year extension of the so-called plastic gun ban.  The bill was on its way to Obama’s desk for signature.  And he couldn’t be happier.

The 1988 law — which was scheduled to sunset on December 9 — had now been given a 10-year carte blanche.  Never mind that the law was poorly drafted and could be used, by an anti-gun administration, to ban large classes of metal firearms, as GOA has explained in previous alerts.

Even though some conservative Senators had concerns with the bill, Senators Chuck Grassley (R-IA) and Schumer brought it up while those other Senators were out of town.  (Massive snowstorms delayed key Senators from arriving back in Washington on time.)

Other Senators foolishly were led to believe that, if they approved a ten-year reauthorization bill, they could prevent the issue from coming up again. 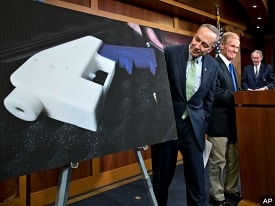 But as GOA has stated time and time again, giving in to the opposition never satisfies them.  It never “gives them all they want” so that they go away and leave us alone.

Never.  And so, within five minutes of passing the 10-year extension, Schumer and Grassley were publicly discussing plans to expand the plastic gun ban to ban a lot more guns.

This should come as no surprise — especially regarding Senator Grassley.  You may remember that we had to go into Iowa in the spring of 2009 and put pressure on Grassley in order to prevent him from agreeing to a bipartisan deal on the anti-gun ObamaCare law.  We had to do the same this past spring after Grassley voted for a significant provision in Obama’s Newtown gun control package.

So fast forward to this past Monday.  When Schumer proposed broadening the gun ban, Grassley replied:  “I don’t think I find fault with anything Senator Schumer said, except as a matter of timing…  Congress then has a responsibility to review the issue … and consider alternative legislation, including what [Schumer] has suggested.”

So now we have the worst of both worlds:  Congress has given the plastic gun ban a ten-year carte blanche, which will allow the Obama administration to engage in all of the anti-gun mischief that its sloppy language invites.  And, at the same time, both Democrats and Republicans (like Grassley) are now committed to making the gun ban even broader over the next two months.

Once again, the lesson is clear.  You don’t outsmart the opposition by agreeing to gun control “lite” — thinking that the opposition will leave us alone, finally satisfied that they’ve gotten all they want.

Some pro-gunners inside the Beltway felt that giving Schumer his plastic gun ban extension would supposedly deny him a vehicle for amending it with something worse.

Really?  Did “our side” really think that Schumer & Co. would not hesitate to find another vehicle to perpetrate their mischief?

No, gun grabbers like Chuck Schumer will never rest until they’ve pried every gun away from our firmly clenched hands.  It’s already started in New York City, where they are using “milder” forms of gun control — like background check records (or gun owner lists) that were implemented years ago — to confiscate newly banned firearms.

And what has Schumer said about the unconstitutional confiscation taking place in the City?  Nothing.  He has not voiced one word of criticism.  And you won’t hear him utter a word of disapproval because he’s 100% in favor of it.  He wants to spread New York City to the rest of the nation.

The question is:  Will conservatives in the Congress realize the incremental threat and stand up to it?

A CALL TO STAND: Your continued action makes a tremendous difference on Capitol Hill.  We had very little time to mobilize during this recent fight on plastic guns, but we were immensely successful after spending three to four months mobilizing the grassroots after the Newtown tragedy last December.

We can defeat future attempts to expand this law, but we will need to remain active and vigilant.  Please stay tuned.

(1) Write your Senators and Representative. Let them know of your displeasure that they let this pass IN BOTH CHAMBERS by voice vote.

(2) Adopt a Senator.  For those of you who have horrid, F-rated legislators representing you, consider adopting a Senator.  There are several Senators who sat by and let this bill pass — and they are being primaried by conservative challengers.  This includes John Cornyn (R-TX), Thad Cochran (R-MS), Lindsey Graham (R-SC) and Mitch McConnell (R-KY).