All Heck is Breaking Loose!

Four issues in which you have been heavily involved have come or are coming to a head this week.

We are putting out this emergency alert to keep you apprised of the fast-moving legislative landscape.

GOA’s campaign against Obama’s war on individual privacy is beginning to really catch fire.  Our article in The Washington Times is being widely circulated by other pro-gun groups and can be read here.

And, although we will probably not have a vehicle for defunding this Executive Action — until the individual appropriations bills begin to move in May — we are optimistic that a majority of senators and House members will oppose this effort to partially repeal federal privacy laws, called HIPAA.

As you probably know, the proposed regulations would repeal HIPAA insofar as necessary to allow psychiatrists to turn their patients into the FBI’s NICS list — all as a result of personal information, communicated in private.

This would massively expand the ability of the federal government to impose federal gun bans on otherwise law-abiding Americans.

Or as we at GOA have said:  These regulations would result in a situation where if you “see a shrink, you lose your guns.”  But now a wide variety of others are beginning to take notice.

Go here to read the comments that GOA submitted to HHS in opposition to their recent, anti-gun regulations.

For a year now, we have told you that we easily have the 34 votes necessary to defeat ratification of the UN Arms Trade Treaty. That treaty would set the stage for far-ranging gun and magazine bans, gun registration, and gun microstamping requirements. 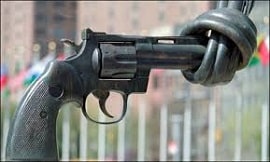 We have told you that the next task would be to pass an appropriations bill amendment which would defund any Obama effort to implement the ATT by executive fiat.  And we have drafted such an amendment and made it available to Congress.

That amendment to defund the UN ATT is about to happen.

Senator Jerry Moran (R-KS) has announced that he has amended the must-pass omnibus appropriations bill to ban funding for the implementation of the ATT.

That big appropriations bill has pluses and minuses, and it probably is not the bill we would have drafted.  But the win on the Arms Trade Treaty is huge.

We have told you that Senate Majority Leader Harry Reid’s corrupt and fraudulent invocation of the “nuclear option” had the potential for packing the federal courts, including the Supreme Court, with anti-gun judges.

On Monday, Senator Reid used this corrupt procedure to force the confirmation of Robert Wilkins to the D.C. Circuit Court of Appeals. You can see how your Senators voted here. (The NAY vote is the pro-gun vote.)

As a district court judge, Wilkins has held that an American living in Canada could constitutionally be stripped by the 1968 Gun Control Act of the right to purchase any firearm in the United States.  In other words, according to Wilkins, the Second Amendment does not guarantee Americans the right to purchase or acquire a firearm.

Senate Republicans have thus far followed a strategy which GOA has publicly pushed — which would insist on votes to defund ObamaCare as a condition of moving Democratic priorities such as the unemployment bill.

The Senate has been tied in knots for the past week, unable to move Barack Obama’s liberal legislative agenda.  This, despite the fact that Harry Reid could remove the roadblock at any time by simply allowing the Senate to vote on ObamaCare.  We’ve been particularly eager to get votes on two amendments:  (1) whether to delay the unpopular anti-gun ObamaCare mandate; and (2) whether to defund a bailout of insurance companies totaling tens of billions of dollars.  Either of these amendments, if adopted, would effectively bring an end to the anti-gun ObamaCare mandate.

As you know, the ObamaCare program sets the stage for compiling a national health database which could be trolled by the FBI and could strip tens of millions of Americans of their Second Amendment rights.

ACTION: Contact your Senators. Ask them to continue objecting to any Unanimous Consent request which would allow Obama’s unemployment bill (S. 1845) to be passed, unless Senators are granted the right to vote on the anti-gun ObamaCare mandate.