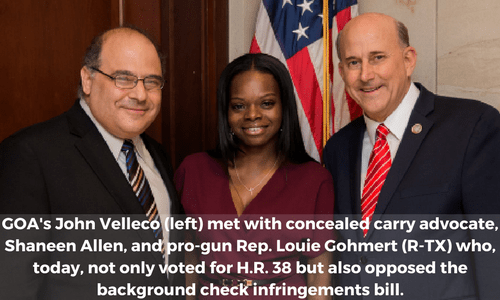 There was great news coming out of the House Judiciary Committee today!

By a 19-11 vote, the Constitutional Carry-friendly reciprocity legislation was voted out of the House committee and is now on its way to passage by the full House.

The legislation would allow anyone with a permit, and anyone from a Constitutional Carry state, to carry in any state in the country — thereby countering the fascist laws of anti-gun states.

In particular, it would allow residents of repressive states to get non-resident permits and thereby circumvent local anti-gun officials.

The term “handgun” would be defined to include “any magazine for use in a handgun and any ammunition loaded into a handgun or its magazine.”

This would circumvent efforts by states like Massachusetts and California to effectively ban guns by banning and/or registering magazines and ammo.

Suffice it to say that pushing the GOOD version of reciprocity to the verge of House passage and enactment is a huge accomplishment which should not be underestimated.

Speaking of the “good version of reciprocity,” the House committee fended off an attempt by Democrats to delete the Constitutional Carry protections in the bill.

By a 17-8 vote, Republicans defeated an anti-gun amendment offered by Rep. Jamie Raskin (D-MD) that would have sought to limit concealed carry reciprocity to permit holders only.

Gun Owners of America opposed this amendment and was happy to see it go down to an inglorious defeat.

Nevertheless, there was some bad news.

The House committee passed a “Fix NICS” bill which will result in more innocent people being thrown into the NICS system.

Gun Owners of America has strongly opposed this legislation, and you can see our previous analysis here, here and here.

Having said that, we are inclined to believe that the GOOD reciprocity bill is a much, much bigger deal for us than Fix NICS is for the gun grabbers.

Both bills now advance to the floor of the House.

P.S. Thank you for all your activism in favor of H.R. 38.  Stay tuned for more updates.  In the meantime, don’t forget to check out the latest Firing Back podcast, which provides needed ammunition to counter the talking points from your liberal anti-gun friends and family during the holiday season.