A Day That Will Live in Infamy

Democrats pull the trigger on the “Nuclear Option”!

{flike}
Last Thursday, November 21, is a day that will live in infamy.
Harry Reid pulled the trigger on the “nuclear option” — a process whereby 52 Senate Democrats voted to change the Senate rules by brute force.  (See the vote here, where “YEA” was the pro-gun vote.)
He did this for the ostensible purpose of packing the D.C. Circuit Court of Appeals with three anti-gun judges — one of which (Robert Wilkins) has held that the Second Amendment doesn’t protect the right to purchase firearms, just the right to possess them.
But make no mistake about it:  The Senate now effectively has no rules.  This means that, if Supreme Court “swing vote” Anthony Kennedy were to die or resign tomorrow, Obama would shove through another virulently anti-gun nominee.
This would mean that Obama’s lasting legacy would be to reverse the Heller and McDonald Supreme Court decisions.  And, as far as the Court is concerned, the Second Amendment would be nothing, other than the right of a state to raise a militia.
So a vote for the nuclear option on Thursday was a vote to begin the process of effectively repealing the Second Amendment.
Don’t believe your lying anti-gun senator — the one who also told you that you could “keep your insurance.”  In an effort to cover their rear ends, Thursday’s rules change purports to exempt Supreme Court nominees from the 50-vote non-filibusterable procedure.
But one would have to be a fool to think that 52 Democrats who would blow up the Senate over an appeals court would not do the same if the balance on the Supreme Court were at stake. 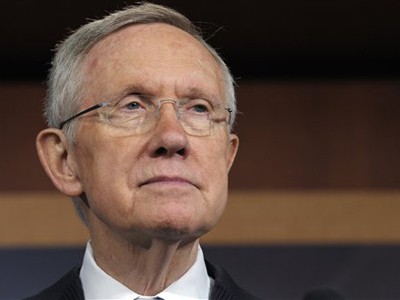 And even worse, before the ink was dry on the tally sheet, Barack Obama commended the Senate and mourned the fact that filibusters had blocked his gun ban and gun registration scheme. What Obama is clearly calling for is for the same “nuclear option” to be used to pass comprehensive gun control.
If this were not enough, the Senate’s number 3 Democrat — New York Senator Charles Schumer — in the guise of renewing the plastic gun ban, tried to sneak through unread legislation which would effectively ban many types of gun manufacturing. [The Senate won’t come back for two weeks, so we’ll cover this bill in more detail in a subsequent alert.]
But the bottom line is that the Senate rules can no longer protect us.  Our only alternative is to get Harry Reid out of the Majority Leader’s position before Anthony Kennedy resigns.
And the only way to do that is to make sure that Mark Begich (D-AK), Mary Landrieu (D-LA), Kay Hagan (D-NC), Mark Warner (D-VA), Jeanne Shaheen (D-NH), Al Franken (D-MN), Tom Udall (D-NM), Mark Udall (D-CO), and Jeff Merkley (D-OR) don’t have their jobs renewed.
ACTION: Contact each of your Senators. Thank him if he voted right on the nuclear option. Castigate him if he voted wrong. The correct message will be sent, based on how your Senators voted on Thursday.