— While on the political scene, GOA exposing lying politicians

The Supreme Court held oral arguments on Monday in a case where Gun Owners of America is heavily involved.

The case is Heien v. North Carolina, where a driver was pulled over by police because his car’s right rear brake light was not functioning properly — even though state law requires only one working rear “lamp.”

Nevertheless, the state Supreme Court upheld the stop and search, claiming it to be “reasonable.”  Thus, the old maxim has been revised to “ignorance of the law is no excuse — unless you are the one enforcing the law.”

GOA’s brief defends the Fourth Amendment property right to the security of one’s person. If no law has been violated, then the government has no superior interest in detaining a person or seizing property, and thus the search and seizure was unconstitutional no matter how “reasonable” the police may have acted. 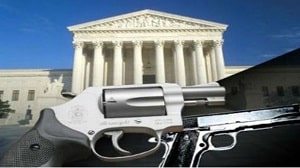 To put it more bluntly, since Mr. Heien was violating no law when he was stopped, the state objectively has no property interest in his person or in his car or anything that could potentially be found in his car (like a gun). For that reason alone, the stop violated the Fourth Amendment, regardless of how “reasonable” some North Carolina judges subjectively believed the police had acted.

Protecting the Fourth Amendment is important because it ultimately protects gun owners from being illegally stopped, searched and having their firearms seized.

You can help support cases like this by giving generously to the work that GOA does.

Not only will that help us to challenge anti-gun laws in the courts, you will be helping GOA to magnify its no-compromise message on Capitol Hill.

You’ve heard the old joke:  How do you know when a politician is lying?

Answer:  His lips are moving!

While it’s a funny line, we know, of course, that this is no joke.  We’ve all grown accustomed to the typical Washington-style politics, where anti-gun politicians will vote to eviscerate the Constitution and to restrict your Second Amendment rights when they’re in Washington, but at election time, they tell you they’ve been with you all along.

Well, GOA has been ferreting out egregious examples of lying lips, and exposing them in their home states.

You can check out our exposés of Senators Mary Landrieu (D-LA) and Mark Udall (D-CO) on the GOA website.

Or make sure you friend us on Facebook to get these updates in a timely manner.

And speaking of elections, the best way to cut through the B.S. that so many politicians put out at election time is to make sure you get a copy of the GOA voter guide, which we have published for the past two decades.

GOA’s voter guide — which will be posted on GOA’s website at www.gunowners.org within the next week — is a great tool for helping gun owners know which candidates really support their gun rights, and which ones are just trying to hoodwink the voters.

So please stay tuned.  We will be alerting you to this soon!