Act: Gun Control will be Voted on Soon in the House of Representatives

The House of Representatives Returns Soon to Pass Gun Control

The Gun Owners of America grassroots have been amazing this month! 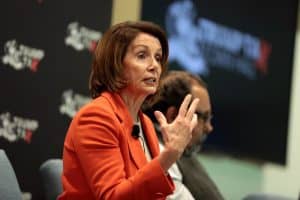 Speaker of the House, Nancy Pelosi

Collectively, GOA activists have sent more than two million messages to Republicans in the Senate and the White House.

We have sat in meetings with high level offices on Capitol Hill, and they have told us that our members are definitely keeping Republican legislators from rushing to support gun control.

So thank you for your activism. It is making a huge difference!

Now, we need to turn our attention to the House of Representatives.

But let me warn you, no matter what we do, gun control is likely to pass in the House. Some might wonder then: Why should we even try? Why should we contact Republican congressmen?

The reason you must take action is that we need to keep as few Republicans as possible from helping Democrats to pass gun control next week.

If the House passes semi-auto bans, magazine limitations or “red flag” Gun Confiscation Orders with the support of 40-50 Republicans, then that will only encourage Senate Republicans to follow suit — and Gun Confiscation will easily pass the Senate.

That’s why we need to deluge the offices of House Republicans now — just like we did in the Senate.

So please add your name to a pre-written letter (above) that will go to every House Republican, warning them that if they vote for gun control, they will face traumatic consequences at the polls.

GOA on the Front Lines

Your support allows GOA representatives to stay on the front lines, fighting the battle for our gun rights.

With Labor Day weekend approaching, you will probably have some free time to spend with family.

So here are several talk shows and articles where GOA spokesmen have been interviewed. I hope you will enjoy these!

1) Texas hero lights up GOA press conference. Stephen Willeford is the hero of Sutherland Springs, Texas, for having stopped the 2017 church killer with his AR-15. GOA held a press conference last week, where Willeford was in attendance, and challenged the Texas Governor to oppose “Red Flag” Gun Confiscation Orders. 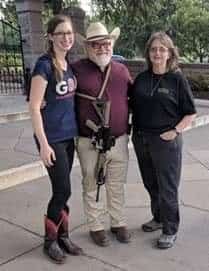 Willeford spoke at the presser and also argued against all gun control. Plus, he displayed the very AR-15 he used to take down the Sutherland Springs gunman. See articles about this event here and here.

2) On Fox News with Laura Ingraham. I appeared on Fox News to debate “Red Flag” laws against a gun control advocated who formerly worked for a Bloomberg organization. You can view the debate here. And you can view GOA Legislative Counsel Michael Hammond’s appearance on “2A Tuesday” to discuss these gun control confiscation laws here.

4) Letters to the Hill. In addition to pounding the halls of Congress, GOA has sent direct communications to legislative offices almost every day this month. This is one of our most recent communications, where GOA Legislative Counsel Michael Hammond counters the Heritage Foundation which came out in support of “Red Flag” Gun Confiscation Orders.

5) Viral uploads you’ve got to see. Finally, hundreds of thousands of people have viewed both the Fox News debate over gun control (shortly after the El Paso and Dayton shootings) and the Rush Limbaugh segment where he ran a short clip of that GOA debate. It’s must-see video if you haven’t viewed it yet!

Gun Control is a Political Loser