Click on the Take Action button and urge your Representative and Senators to insist that House and Senate leaders bring up Constitutional Carry reciprocity legislation for votes (H.R. 923 and S. 498). (Link no longer available)

A gentleman came to visit me earlier this week.

He lives in Virginia, but work had required him to recently travel to Pennsylvania. 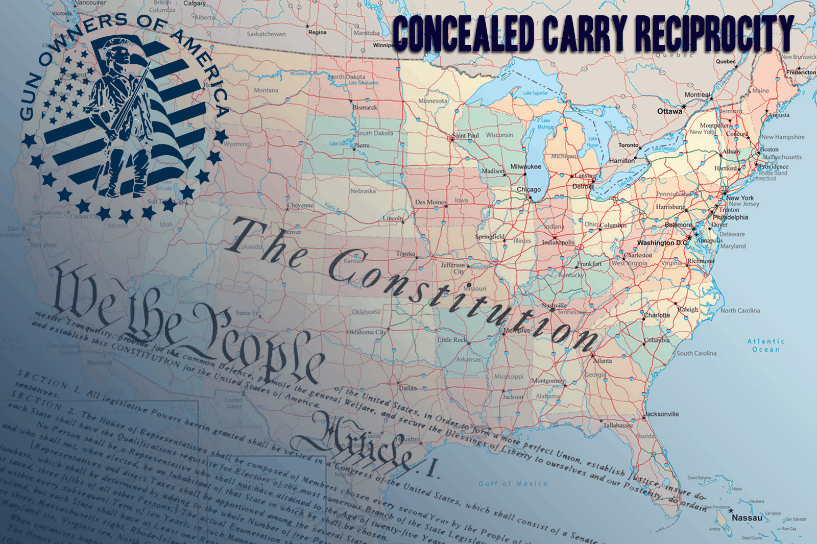 Doing so meant that he had to drive through notoriously anti-gun Maryland, where officers have reportedly stopped and detained drivers in search of guns.

As a result, this concealed carrier decided to leave his gun at home.

“Did I do the right thing?” he asked.

We discussed his predicament and what options he could have implemented.

But the tension he faced is genuine — and it’s been repeated hundreds, if not thousands, of times by gun owners across the country.

Anti-gun jurisdictions scare many law-abiding gun owners into leaving their guns at home.

It doesn’t have to be that way.

Rep. Marlin Stutzman is the sponsor of H.R. 923, a national reciprocity bill that has more than 100 cosponsors.

This bill would protect the right of concealed carriers to bring firearms with them for self-defense as they travel.

And the bill is Constitutional Carry friendly, in that it does not force concealed carriers from permitless carry states to get licenses before they travel out of state.

More and more Representatives are cosponsoring H.R. 923.  The number has doubled over the past several weeks.

It’s imperative that we get even more cosponsors, however, because the House leadership may bring up a reciprocity bill in the Fall.

While there are other similar bills, only H.R. 923 protects citizens who live in Constitutional Carry states.

So please urge your Representative to insist that the leadership bring up H.R. 923.  Likewise, urge your Senators to bring up S. 498 for a vote.

Gun-Free Zones are deadly.  And denying any person the benefits of carrying firearms for protection relegates him or her to traveling in a “mobile” Gun-Free Zone.

Again, please contact your Representative and Senators on this matter.

It’s important that Congress pass this legislation … so that we can protect the rights of all concealed carriers … and eliminate every victim-disarmament zone in this country.

The video explains why mass shooters target Gun-Free Zones, and demonstrates how guns are effectively being used in self-defense.

In fact, guns are used many times more often to save life in this country than to take life.

The video is entitled, “The Lie Behind Gun Free Zones,” and GOA just released it today.

You can view the video here on the GOA YouTube page.

And you can view GOA’s previous expose of Gun-Free Zones, called Praesidium — a powerful short film that has elements of H.G. Wells’ Time Machine.

Another resource that shows the dangers of Gun-Free Zones — and gun control in general — is Dr. John Lott’s new book, The War on Guns: Arming Yourself Against Gun Control Lies. 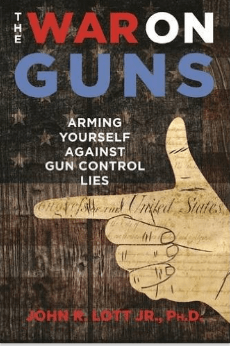 Dr. Lott is, perhaps, the most prolific author of gun-related studies in the country.  And in this new book, he tackles some of the “sacred cows” of the anti-gun Left.

Do Universal Background Checks really work?  Are polls an accurate reflection of public opinion, or are they being doctored?  Does Australia show that gun control works?  How does the US crime rate compare to other countries?

All these questions and more are answered in the War on Guns.

I hope the above resources will help you and your family to better articulate Second Amendment principles with those who don’t understand the benefits of freedom.

Thank you for taking action in defense of our God-given, constitutionally-protected rights.

P.S. Please contact your Representative and Senators.  Urge them to do everything in their power to make sure that H.R. 923 and S. 498 come up for votes.  These Constitutional Carry reciprocity bills are totally compliant with the Second Amendment. The House and Senate leadership should accept no substitutes.