Vote for the Second Amendment on Thursday

The race to fill Interior Secretary Ryan Zinke’s vacant congressional seat is important in and of itself.

The Democrat candidate — Leftist anti-gunner Rob Quist — is a committed anti-gun liberal who will be a puppet of Democrat Leader Chuck Schumer.

Like Jon Tester, he will claim to be “from Montana” during the election, but then vote for Michael Bloomberg’s liberal anti-gun agenda when it is too late to do anything about it. 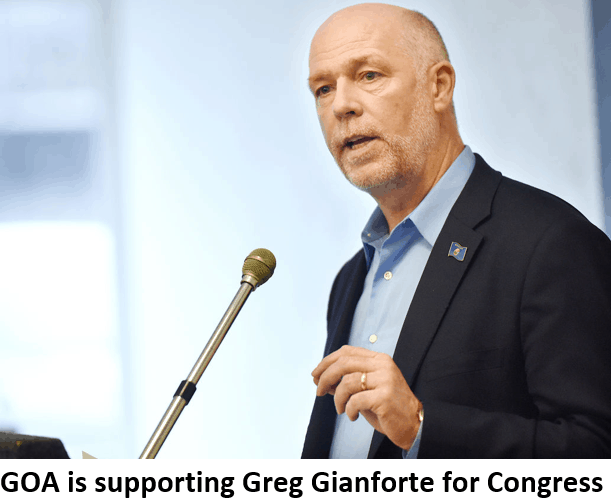 But the race, scheduled for this Thursday, May 25, maybe even more important as a proxy for 2018.

The Leftist mobsters who turn up at staged “town hall” meetings believe they are riding a wave which will carry them to control of the House and Senate in the 2018 elections.

But, as David Weigel asked on May 16 in The Washington Post, “If Democrats don’t win [in Georgia or in tougher races in Montana and South Carolina], how can they take back the majority in 2018?”

A Republican win in the special election in Montana is important because it would say to quivering congressional Republicans that they don’t have to sell out their principles to retain control of the House and Senate in 2018.

Consider what this means:  Will House Speaker Paul Ryan and House Republicans push national reciprocity early and forcefully — or won’t they?

Will Ryan and House Republicans take a firmer position on repealing the anti-gun ObamaCare law — or won’t they?

Will the Senate move the bill to restore the rights of 257,000 law-abiding veterans?

All of these questions rest on whether we can prove, in Montana, this Thursday, that the “Leftist wave” is nothing but an astro-turf movement funded by George Soros.

Which brings us to the Republican candidate for Zinke’s seat, Greg Gianforte — a candidate who will be a reliable, strong pro-gun vote.

But, if Gianforte loses and House Republicans — plus Montana Senator Jon Tester — lunge to the Left, then we won’t get much pro-gun legislation from either the House or the Senate.

And, come 2019, we could once again be confronted by a Congress controlled by Nancy Pelosi and Chuck Schumer — with Quist and Tester casting the deciding votes in the leadership races.

Please do this not only for the sake of the pro-gun votes Gianforte would cast, but also because of the destructive conclusions which House Republicans would draw from his defeat.