Click on the Take Action button to urge your Representative to insist that the three gun-related concerns with ObamaCare Lite are addressed.

The U.S. House of Representatives is expected to again take up a “repeal and replace” bill for the anti-gun ObamaCare law. 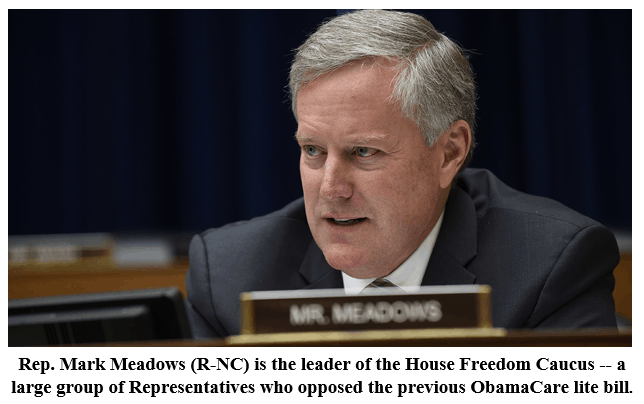 The Washington Examiner recently reported that, “Key negotiators are working on a new proposal to repeal and replace ObamaCare, led by Rep. Mark Meadows, R-N.C., the leader of the conservative House Freedom Caucus, and the GOP’s moderate wing leader, Rep. Tom MacArthur, R-N.J.”

The previous “repeal and replace” effort  (H.R. 1628) died in the House because it retained all of the major elements of Obama’s ObamaCare bill:  the mandate, the subsidies, the entitlements, the requirement that everyone be able to get lousy insurance, and the politically correct requirements for every insurance policy.

Being a gun organization, GOA made it clear that we would regard “ObamaCare Lite” as an anti-gun bill unless it took care of three problems.

First, given that the government will still be effectively mandating the purchase of insurance, it is critical that insurance companies cannot ask about gun ownership, penalize gun ownership, or even deny insurance to gun owners.

Even the original ObamaCare law accommodated that concern.

Second, the bill must prohibit doctors from asking about gun ownership and entering that information into a federal health database — accessible to the ATF.

Third, the bill must prohibit the ATF from trolling the national health database in order to take away people’s guns — just as Obama proposed to do with Social Security.

Unless these three concerns are addressed, Gun Owners of America will rate this as an anti-gun bill.

Please urge your Representative to demand that the above three gun-related ObamaCare Lite concerns are addressed.

P.S.  Please distribute this alert to your pro-gun family and friends and urge them to take action. To renew your GOA membership or to join for the first time, please click here.