Next week, there will be more gun votes on the floor of the United States Senate than there will be for the rest of the year put together.

The Senate will vote on an amendment by Senator Mike Crapo (R-ID) on whether to eliminate the Operation Choke Point program — designed by the Obama administration to squeeze the financial life out of the firearms industry. 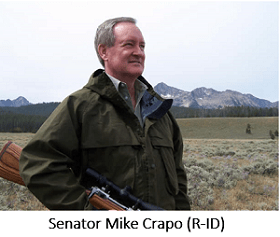 The vehicle will be the Concurrent Budget Resolution.  And it’s perhaps the only time when senators can — and do — offer amendments on ANYTHING THEY WANT.  And they offer hundreds of amendments.

But — and this is an important “but” — despite the fact that there will be hundreds of amendments, these votes will freeze senators into a “pro-gun” or “anti-gun” position.  And, when reciprocity or Choke Point come up again in two or three months, senators will find it almost impossible to shift from the positions they will take on the Budget Resolution next week.

Remember the UN Arms Trade Treaty?  The first vote we forced on this issue was an amendment to the Budget Resolution.  And because a majority of senators voted against it on the Budget Resolution, we were able to boomerang this vote into an appropriations rider prohibiting Obama from implementing it by executive fiat.

So, here’s what’s going to happen next week.

We have been authorized to tell you that Senator Mike Crapo of Idaho will offer an amendment to cut off funds for Operation Choke Point. Choke Point, as you remember, was an effort by Eric Holder and the Federal Deposit Insurance Corporation to shut down the firearms industry by cutting off credit from gun dealers and eliminating credit card processing for the Second Amendment community.

Although Holder, under pressure, removed guns from the list of “high risk” industries that included pornographers, drug paraphernalia, and payday lenders, he is apparently using Choke Point to destroy gun dealers on a case-by-case basis.

The Crapo amendment is aimed at shutting the program down.

In addition, we continue to work with senators like Mike Lee, Marco Rubio, Ted Cruz, and others to ensure that the Senate will be forced to vote on reciprocity, ammo bans, and semi-auto and magazine bans.  We will e-mail you again as senators authorize us to notify you of their amendments.

ACTION:  Contact both of your senators.  Demand that they support Senator Mike Crapo’s amendment to prohibit Eric Holder from shutting down the gun industry by cutting off its credit.