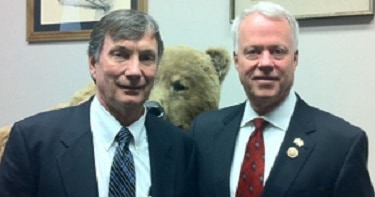 Gun Owners of America is proud to endorse Congressman Paul Broun for U.S. Senate. Rep. Broun has been one of our most vocal leaders protecting the Second Amendment during his time in Congress.

Congressman Broun currently serves as the Chairman of the Second Amendment Task Force in the House, and he has been leading the charge to protect our gun rights at a critical time in history, when the anti-gun left is pushing for massive new gun control laws.

Rep. Broun is carrying a heavy load on his shoulders — not only protecting the Second Amendment, but the Constitution as a whole — and GOA will do everything in its power to help him move to the Senate to join constitutional leaders like Rand Paul, Ted Cruz and Mike Lee.

Georgia is a nationally known pro-gun state and the voters would be well served and protected by electing Congressman Broun as their new Senator.

Gun Owners of America looks forward to helping Dr. Broun during his entire Senate campaign. You can help Paul Broun become Georgia’s next Senator by going to his website and contributing to Paul Broun for U.S. Senate.

This will be one of the most crucial Senate races in America in 2014, and we need to start helping Paul Broun right NOW.

P.S. Dr. Paul Broun is one of the top, pro-gun congressmen who are currently serving in Washington.  He will be a welcome addition in the U.S. Senate!  Click here to learn more or to make a generous contribution to Dr. Paul Broun for U.S. Senate.

Alaska House Strikes a Blow for the Second Amendment