Click on the Take Action button and urge your Senators to reject every word of gun control and to pass a bill repealing gun-free school zones (like H.R. 34). The letters are specially crafted for Republicans or Democrats.

I want to thank you for deluging the White House with phone calls yesterday. 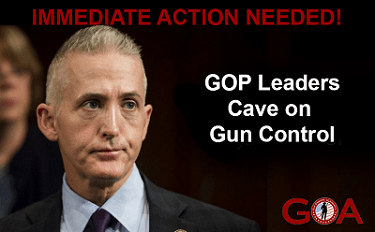 For the first time, since the Florida shooting, the President has finally taken a stand in favor of having armed, trained teachers to fire back at the next depraved school shooter (although, sadly, he is also supporting some gun controls).

But, of course, the anti-gun Left doesn’t want any pro-gun response.

I’m sure that you probably don’t spend your day watching NBC News. And I don’t blame you.

However, if you weren’t watching this past week, you missed a big complement that they paid you. But more on that in just a second.

First, I have to tell you that the Second Amendment may be in more danger now than it has been in the last 20 years.

I wish that were just hyperbole, but I’m very serious.

The anti-gun Left is pushing an all-out assault on our gun rights.

You may remember that “Fix NICS” sets up a “bribe pot” of 2/3 of a billion dollars to convince states to send millions of additional names to NICS.

GOA has already alerted you as to how this bill (S. 2135) will help disarm military veterans and seniors, medical marijuana users, vacationers with outstanding traffic tickets — and how it will make existing protections for gun owners even worse.

“This is the first thing of multiple things that need to be done,” said Lankford, in a statement that is troubling for so many reasons.

Senator Feinstein is pushing to couple “Fix NICS” with a so-called “bump stock ban,” which would, in fact, ban high-capacity magazines, match triggers, and anything else that “accelerates” a semi-automatic’s rate of fire.

The President has indicated he will consider some form of each of these gun control initiatives.

Even outgoing South Carolina Republican Trey Gowdy has now decided that banning bump stocks is fine with him.

But there is hope.

NBC News commends YOU for YOUR effectiveness

There is still some fear and trepidation by anti-gun lobbyists and media pundits that all their efforts to enact new gun controls will fail.

NBC News reporter Kasie Hunt said on Sunday that in addition to other gun groups:

One of the panelists claimed that polls show a majority of Americans support gun control. And based on that false claim, he wondered why the anti-gun Left can’t get gun control passed.

To that, one of the other panelists echoed Hunts’ previous comments in stating that, “The [gun control] side has not done as good as a job” as gun groups like GOA in mobilizing people to contact Congress.

Having said that, while we’re grateful that a billion-dollar enemy has commended us for our effectiveness, we’re not for a moment deceived into thinking the danger has passed.

Tell your Senators to reject the secret anti-gun meetings to push “Fix NICS” and to keep faith with those who believe in the Second Amendment. 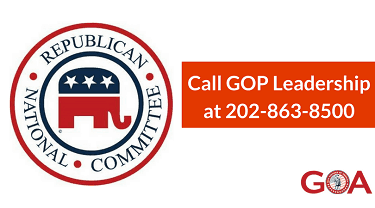 Tell them also to INTRODUCE, VOTE FOR and PASS a bill like H.R. 34 — a bill to repeal the gun-free zones that keep our first responders (like teachers and principals) disarmed.

Again, the letters are specially crafted for Republican or Democrat Senators.

And if you have time, please call the Republican National Committee (RNC) and tell them they can kiss any support they could ever hope to get from you goodbye if Republicans help deliver gun control to Dianne Feinstein and Chuck Schumer.

We are in for the battle of our lives.

P.S. GOA is expending a huge amount of its resources to rally more gun owners into this battle … to get our no-compromise voice out to the media (see my appearance on Fox News here) … and to put as much heat as we can on Congress. Please consider chipping in $10, $20 or $35 to put even more heat on legislators in Congress.