Please call your Senators. (Locate them here.) Urge them to oppose every gun control proposal or compromise … and tell them to send a repeal of gun-free school zones legislation (H.R. 34) to the President’s desk. See their numbers below.

Tell Your Senators to OPPOSE All Gun Control!

I hope that you had a great President’s Day holiday.

Even though Congress is home this week on recess, I hope that you will call your Senators and urge them to oppose using the Florida tragedy as an excuse for gun control. 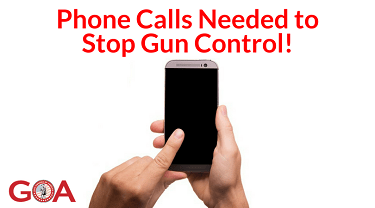 You can determine who your Senators are here.

Your Senators need to know that the majority of Americans still support the 2nd Amendment … that they don’t want any gun control “lite” infringements in response to what happened in Florida … and that we want an end to gun-free school zones (H.R. 34).

Let’s deluge their offices with phone calls and really put them on notice!

As you know, the Parkland, Florida shooting has reenergized the anti-gun Left in Washington, DC.

And as I told you last week, GOA is hearing that there are Republican legislators in Congress who are beginning to waffle.

They are looking for gun control “lite” alternatives that will make it look like they are “doing something.”

Some Republicans may be caving

Some Republicans are now on the fence and ready to support the so-called Fix NICS bill that we have told you so much about.

This bill (S. 2135) will help disarm military veterans and seniors, medical marijuana users, vacationers with outstanding traffic tickets — and how it will make existing protections for gun owners even worse.

The anti-gun media continues to spin the narrative to make it appear that Americans now want gun control.

It’s a lie, but Senators can be very susceptible to that kind of pressure.

So that’s why I need you to make just two calls today.

Urge them to oppose every gun control proposal or compromise (including the misnamed Fix NICS bill, S. 2135) … and tell them to send a bill like H.R. 34 to the President’s desk.

Again, you can determine who your Senators are by clicking here.

Thank you so much for your help.

P.S. GOA is fighting hard against gun control here in Washington. Please consider chipping in $10, $20 or $35 to put even more heat on legislators in Congress.