Could a Rabid Anti-Gunner be Given a Top Post to Advise Trump?

Disgraced Anti-Gun Criminal Being Considered for a Top Post … Again

Urge the Administration to Nix the Petraeus Pick … Again

Such is the case with David Petraeus, who is now a candidate to replace National Security Advisor Michael Flynn.

Petraeus is one of four names that are currently being considered.

You may remember that GOA helped spike Petraeus’ nomination for Secretary of State back in December. As one media report stated then:

Gun Owners of America, the leading no-compromise pro-gun rights organization in the nation, sent out an e-mail highlighting the former general’s rabid anti-gun rights extremism…. But the pressure from GOA and other powerful organizations that backed Trump may have paid off, as the most recent reports indicate that the president-elect appears to have soured on Petraeus. 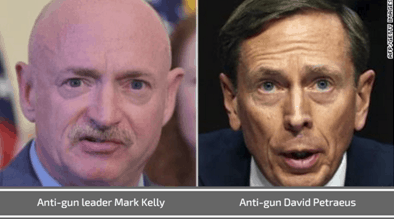 Unfortunately, someone in the administration must really like Petraeus, because now his name is being considered again — despite the fact that he is a convicted criminal.

If appointed, Petraeus would still be on probation — while serving in the country’s most sensitive national security post.

And that’s the “good” part.

On the “bad” side, Petraeus is an anti-gun loon who was co-founder, with the husband of Gabrielle Giffords, of Veterans Coalition for Common Sense — a phony organization of “useful idiots” designed to convince politicians that veterans favor gun control.

As National Security Advisor, Petraeus would be the arbiter of intelligence coming in from the CIA, FBI, NSA, State Department, and other intelligence sources.

Petraeus could be expected to argue the anti-gun side of both of these issues.

Unless Trump withdraws ITAR guidance, it will be effectively illegal to be a “gunsmith” with respect to any firearm on the Munitions List or the Commerce Department’s Arms list.

You would be considered a criminal “gunsmith” if you took a tool to a gun (other than for purely cosmetic purposes) or if you replaced a part, one-for-one, and the new part made the gun function better.

Also under ITAR regulations, you would be a criminal if you conveyed any “how-to” information on the Internet with respect to any Munitions List gun.

Petraeus is expected to fight for the continuation of both of these ITAR interpretations.

In addition, Petraeus could be expected to fight for the UN Arms Trade Treaty (ATT), which would require a national gun registry — and which would allow any president to ban all handguns, all semi-autos, or most AR-15 ammunition — all by executive fiat.

And Petraeus, if he were appointed National Security Advisor, would represent anti-gun policy.

So please contact President Trump and urge him to reject the appointment of disgraced anti-gun criminal David Petraeus for National Security Advisor.