Joe Manchin, he’s selling out your gun rights, and lying to you about it as well.

Reports out of Capitol Hill reveal that just-reelected turncoat West Virginia Senator Joe Manchin is about to stick a big knife in the back of American gun owners.  And to make matters worse, he’s lying about what he’s doing.

Both Manchin and House anti-gun crazy Carolyn McCarthy are claiming to be “working with NRA” to enact gun bans and national gun registries. NRA says flatly that Manchin is lying, and we believe he is. (The Hill, 1/24/13) 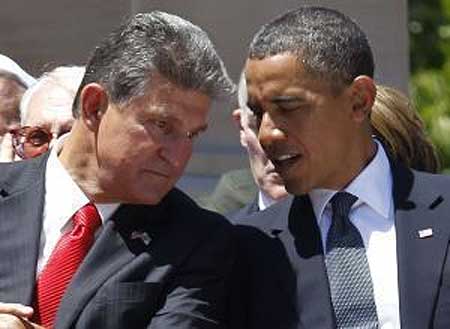 Ironically, Manchin was the “gun owner’s best friend” on November 5 — the day before his reelection to a six-year term let him to pull a great big “gotcha” on those West Virginians who were tricked into believing his representations.
But make no mistake about it:  Joe Manchin’s draft would impose a gun ban on veterans and would set up the framework for a national gun registry.
150,000 honest law-abiding veterans are currently in the NICS system.  They didn’t do anything wrong; they honorably served their country.  But when they sought VA counseling for a traumatic combat experience, the VA appointed a fiduciary to oversee their fiscal affairs and then took away their guns.  And, again, there are 150,000 honest veterans in the system.
New York Senator Charles Schumer viciously fought a Coburn amendment on the DoD bill which would require that veterans get their day in court before their rights were taken away from them, and he won.
What the Manchin bill is about is insuring that “bad guys” like veterans can’t get guns.  And, under Barack Obama’s “Executive Action #1,” the NICS list could soon include tens of millions of additional soldiers, police, firemen, and other law-abiding Americans.
But veteran disarmament is not the only problem with Joe Manchin’s gun ban.
Manchin’s bill would set the framework for a national gun registry and impose a chokehold on gun sales.  There are at least four big reasons for this:
FIRST:  Every gun owner in the country would have a “Form 4473.”  Increasingly, the Bureau of Alcohol, Tobacco, Firearms & Explosives are going into gun dealerships and illegally copying all of those 4473’s.
SECOND:  The FBI refuses to tell us how or whether it’s complying with federal law by destroying the Brady Check names, rather than keeping them for a national gun registry.
THIRD:  As it is, the Brady Check system is breaking down on days such as last year’s Black Friday — outlawing all gun purchases.  If you have to drive 200 miles from your farm to sell your gun to your neighbor, this effectively outlaws any efforts to sell or buy a gun.
FOURTH:  Increasingly, the FBI is blocking transfers because someone’s name is “similar” to someone else.  When the legal purchaser complains, the FBI’s response is “Sue us!”
ACTION: Please click here to contact your U.S. Senators.  Ask them to oppose Joe Manchin’s veterans gun ban and national gun registry.