Will Republicans Repeal one of the Most Devious Anti-gun Laws on the Books?

ACTION: Contact your Senators and urge them to support the House-passed bill (H.R. 596) repealing anti-gun ObamaCare. 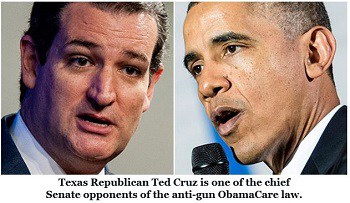 The original law prevented doctors from doing this, but then Obama’s lawless Executive Action #16 in January of 2013 effectively (and unilaterally) repealed this prohibition on doctors asking their patients about guns in the home.

ObamaCare also opens the door for the ATF to troll that database in order to impose gun bans on millions of Americans with mental disabilities — in much the same way that the Veterans Administration has disarmed almost 200,000 law-abiding veterans.

“As odd as it seems, ObamaCare contains provisions that jeopardize gun ownership, especially for veterans,” says TownHall columnist Rachel Alexander.  And it’s organizations like Gun Owners of America, she says, that “continue to expose these sneaky backdoor attempts at gun control.”

Sneaky, indeed, but that could all be changing now.

On Tuesday, the U.S. House of Representatives, by a largely party-line margin of 239-to-186, voted to repeal ObamaCare.  (See the vote here.)

The bill now goes to the Senate, where Majority Leader Mitch McConnell will force all 100 senators to go on record in support or opposition to it.  Senators like Ted Cruz (R-TX) are pushing hard for a repeal of this anti-gun ObamaCare law.  In fact, Cruz had already introduced his own repeal bill, S. 339, which is cosponsored by 47 Senators!

The House has already voted on an ObamaCare repeal more than 50 times, but never when Republicans controlled both chambers of Congress.

And while Obama is currently threatening to veto the bill, Congress can always add the repeal to a must-pass piece of legislation.

Besides, even the New York Times, which is hardly a “conservative rag” — reported Sunday that White House aides are worried that the upcoming “tax-filing season will generate new anger” against ObamaCare as uninsured consumers “learn that they must pay tax penalties.”

The pressure is mounting.  Now is the time to strike!

ACTION: Contact your Senators and urge them to support the House-passed bill (H.R. 596) repealing anti-gun ObamaCare.  And given that there will be, undoubtedly, an attempt to filibuster the repeal, urge them to shut-off debate by voting for “cloture.”

Will the Gun Lobby Stand United Against Obama’s Pick to Replace Eric Holder?