A Big, Big Week for the 2nd Amd in New Hampshire

Click on the Take Action button to urge your state rep to support Constitutional Carry (SB 12) and the carrying of rifles in vehicles (HB 84), but to vote a ban on private gun sales (HB 201) as inexpedient to legislate.

Urge Your Rep. to Oppose Ban on Private Gun Sales

This bill (SB 12) now goes to the full Senate, where it is expected to be approved this week by a party-line vote, and then it will be transmitted to the House. 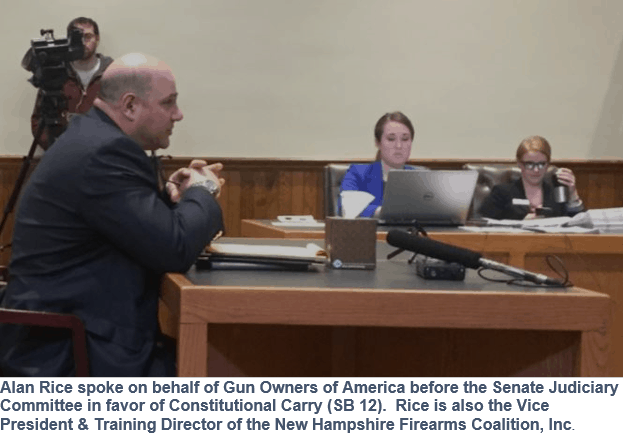 2) Vehicle Carry.  The House Fish and Game and Marine Resources Committee will, this Tuesday, hear testimony on House Bill 84, which would allow Granite Staters to protect themselves by keeping rifles in their vehicles.

3) Ban on Virtually all Private Gun Transactions.  Perhaps the most imminent challenge that Granite Staters face is legislation to outlaw virtually all private gun transactions in New Hampshire (House Bill 201).

This Bloomberg-drafted legislation is the first step in a process to impose New York’s fascist laws on New Hampshire and other pro-gun states.

If enacted, this bill would prohibit you from buying a gun from your lifetime neighbor unless you took a day off of work, went into a gun shop, paid a hefty fee, and secured the FBI’s permission to exercise your Second Amendment rights.

Take into consideration that 95% of initial denials under the Brady Check are “false positives” — that is, illegal denials of your constitutional rights.

Like comparable bills drafted for other states in Bloomberg’s back rooms in New York and Washington, House Bill 201 is clownish in its construction — and obviously drafted by someone who knows nothing about firearms.

But a comparable measure in Maine — which was defeated because of its ramifications for hunting and target shooting — looks downright “professional” compared to this slipshod effort which former New York City Mayor Michael Bloomberg is attempting to foist on New Hampshire’s General Court.

HB 201 has no exceptions for hunting, target practice or competitive shooting

You will hear a lot about how this bill only applies to “commercial sales.”  Don’t be fooled!

But, at its lowest common denominator, “commercial sale” is defined to mean a “transfer … of a firearm … pursuant to an advertisement, posting, listing, or display.”  “Display” is nowhere defined.  “Posting” is also nowhere defined, but presumably includes a single communication over the Internet.

In other words, you can be SURE the transfer of a firearm is not a “commercial sale” only if no one knew it was to be sold or transferred — and you didn’t see it prior to the transfer or sale.

“Transfer” is also not defined.  But it will include handing off a gun on a hunting trip, or while target shooting or participating in competitive shooting.  It will also include showing your gun to a neighbor or friend.

Unlike the “joke” legislation which was defeated by the voters of Maine, House Bill 201 has no exception for transfers to any relative, including your son — on a hunting trip.

It has no exception for hunting trips.

It has no exception for target or competitive shooting.

Oh, and since it’s illegal under 18 U.S.C. 922(b)(1) for a dealer to transfer to a minor — and since section II(a) requires dealers to treat Brady Checks as though they were the sellers — hunting and shooting by minors in New Hampshire will effectively become illegal.

Billionaire Michael Bloomberg will no doubt be channeling a lot of money into the state in an effort to “buy” New Hampshire, so it’s important that we fill the hearing room with lots of pro-gun witnesses.

So again, please urge your state representative to vote a ban on private gun sales (HB 201) as inexpedient to legislate — but urge support for Constitutional Carry (SB 12) and the carrying of rifles in vehicles (HB 84).