It’s Time to Push Back Against the President!

“GOA was EXCELLENT at combating CNN’s talking points. Pratt made so much common sense.” — A viewer commenting on GOA’s fiery debate with CNN host Carol Costello on Friday

ACTION: Contact your Representative and Senators and urge them to cut off every penny of funding for Obama’s unconstitutional executive actions.

The president conducted another dog-and-pony show last week during a CNN-sponsored “Town Hall.” 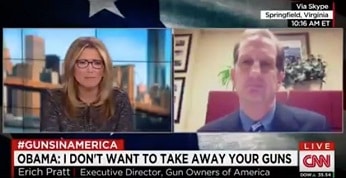 The president trotted out several worn-out lies, like his claim that guns are more likely to kill you than save your life.

He even had the audacity to say that background checks are necessary since we wouldn’t otherwise know if drug dealers were buying guns.

Really?!?  Has the president already forgotten Fast & Furious — when his administration gave green lights to known criminals so they could purchase firearms and smuggle them south of the border?

Of course he didn’t forget, but this president doesn’t care about facts or statistics that don’t support his ambitious gun control agenda.

The United States is experiencing record low crime rates, but Obama continues to pursue his anti-gun agenda in spite of the fact that murder rates are at their lowest levels in 25 years.

Nevertheless, Obama tried to make his radical agenda sound like it’s simply a few tweaks here and there — ignoring, of course, that his oath to uphold the Constitution should prevent him from imposing any “infringements” on gun rights at all.

GOA on the Front Lines

Though the President’s media circus last Thursday night was tightly controlled by the White House, GOA spokesmen have appeared on more than a thousand media outlets to discuss the President’s agenda.

You can view a few of them here.

* A “tense” debate with a CNN host who attempted to keep me from debunking the anti-gun liberals’ talking points.

* Plus many more radio and TV appearances where GOA spokesmen have recently taken on Obama’s gun control proposals — all viewable at GOA’s YouTube page here.

GOA has posted several analysis — at www.gunowners.org — to explain just some of the executive actions that the president announced earlier last week.

* Obama is moving to outlaw gun collectors and hobbyists — using an amorphous expansion of the concept of “engaging in the business.”

* He wants to spend more money on gun control and “stick it” to Social Security beneficiaries in just the same way that the Veterans Administration has disarmed military veterans.

* And Obama proposes to use taxpayer dollars to develop (and ultimately require) guns that have to be locked up and guns that cannot be activated without a fingerprint — an “improvement” that would make guns useless against a home invader who bursts into your bedroom in the middle of the night.

We are pleased to report that several congressmen are ready to defy the President and are taking up GOA’s challenge to defund his executive actions.

“What the president has done is unconstitutional,” said Rep. Ken Buck (R-CO), who advocated cutting off funds for Obama’s gun control proposals using the appropriations process.

Rep. Buck, who was supported by Gun Owners of America in his initial bid for Congress, added that he hopes Senate Republicans will “stage a protest by refusing to confirm Obama’s nominees.”

And speaking of the Senate, Politico reports gun rights groups like Gun Owners of America “are pressuring Republicans to block a [sentencing reform] bill in retaliation for Obama’s actions.”

We will give you further updates on the threats to gun owners through this Senate sentencing bill in a future alert.

Rep. Culberson leading the charge in the House

Rep. John Culberson (R-TX), who is the Chairman of the House Appropriations Committee’s subcommittee overseeing the Justice Department, fired a “shot across the bow” in a letter to Attorney General Loretta Lynch.

Culberson warned that “the House Appropriations Committee will not provide resources to your Department for the development or implementation of unlawful limitations on the unambiguous Second Amendment rights of Americans.”

There are a lot of action items that can be taken, and as we mentioned in our previous alert, we will be pursuing legal action.

But until then, there’s a lot that the Congress can do to rein in the President using the congressional “power of the purse.”

With your support, we will generate an intense amount of pressure — just like we did in 2013 when we defeated ALL gun control, after helping give Republican Senators a spinal transplant so that they would have the fortitude to stand up to the President.

So please take action and urge your congressmen to cut off every penny of funding for Obama’s unconstitutional executive actions.

P.S. Obama made his anti-gun agenda clear with last week’s executive actions.  He is again attacking private firearms sales, attempting to put millions of seniors into the NICS system, and beefing up his anti-Second Amendment regime.  We can’t let Obama’s last year in office be the worst year for gun owners. Take action today.