A lot of gun owners were celebrating when Hillary Clinton lost.

Sure, it was great to see gun grabbers defeated…

…but we haven’t won anything yet.

The U.S. is still signed on to the UN’s “Arms Trade Treaty.”

And Obama’s anti-gun Executive Orders are still in force.

We can’t celebrate yet.

And I am absolutely committed to making sure we rip out the heart of Barack Obama’s eight-year war on the Second Amendment.

Republicans may have the White House, the Senate and the House, but unless something is actually done to roll back Obama’s anti-gun mandates, it’ll be like Hillary won.

That’s why I am personally asking you to join Gun Owners of America for one year for only $20. 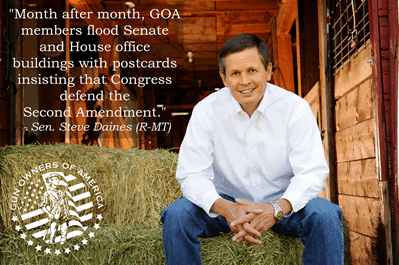 Every month, you will receive information about legislation that will impact your gun rights, along with a pre-written postcard for you to mail back to Congress.

I can tell you two things about GOA’s effectiveness.

First, when a member of Congress gets thousands of postcards dumped on their desk, they sit up and take notice.

And secondly, I can tell you for certain that without the voice of GOA members, gun control would have passed after the Sandy Hook shooting…or after Orlando…or after any tragic event which the media and anti-gun politicians use as an excuse to take away YOUR gun rights.

Now that Donald Trump is about to take office, this is the time for you and GOA to tell my Senate colleagues that you expect them to actually do something, like passing REAL national concealed carry reciprocity. Not only that, we have to make sure that Obama’s anti-gun Executive Orders are repealed and that we get OUT of the UN gun treaty.

We’ve been here before.

In 2001, George W. Bush took office with a Republican House and 54 Republican senators.

Not much got done.

We can’t let that happen again, especially since Donald Trump will be sworn in with two FEWER Republican senators than Bush had.

Unless they hear from you, history will repeat itself. 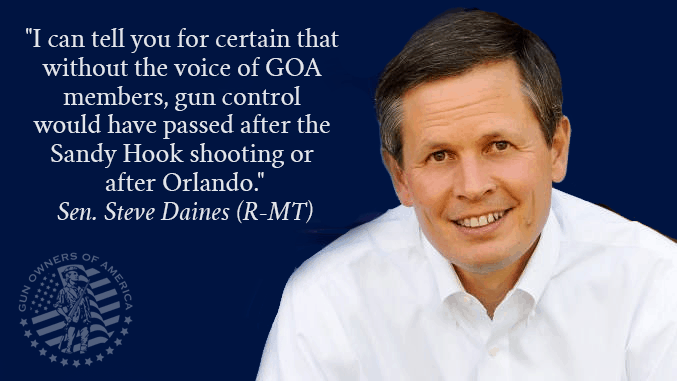 And we will have WASTED this opportunity.

We MUST get out of the UN’s “Arms Trade Treaty,” which requires committed countries to compile tracking lists of every gun and gun owner.

We MUST repeal Obama’s anti-gun Executive Orders. As long as they are in force, it’ll be like Obama, not Trump, is the acting President.

And we MUST pass REAL national concealed carry reciprocity.

The Republican Senate won’t do that unless they hear from you!

Over the past few years, there have been two approaches to reciprocity. But only ONE protects citizens in Constitutional Carry states.

Most congressional bills that claim to be national reciprocity don’t apply to the one in five gun owners who live in the 12 states that actually practice Constitutional Carry.

That’s why we need to pass GOA-backed legislation like a concealed carry reciprocity bill that stops anti-gun states like New York and California from cancelling the Second Amendment rights of Americans from other states.

Not only must Congress pass national concealed carry, they MUST pass a version that does not require residents of Constitutional Carry states to get permission slips.

So, please, take just a moment join forces with GOA today. Your one year membership with GOA is a $20 investment in the future of your gun rights.

We’ve been here before, with a Republican president, Senate and House.

The 1994 Clinton gun ban was allowed to expire, but so much more never got done.

Please sign up with Gun Owners of America today.

P.S. I was so happy to see Donald Trump win and Hillary Clinton lose. But gun owners haven’t won anything yet. Obama’s gun bans are still in force, the U.S. is still signed on to the UN’s latest gun grab treaty and we still don’t have nationwide concealed carry reciprocity.

The last time we had a Republican President, Senate and House, not much got done. The 1994 Clinton gun ban was allowed to expire, but they never passed national concealed carry reciprocity. WE CAN’T LET THEM FAIL TO DO THAT AGAIN!

That’s why I am personally asking you to join Gun Owners of America with a $20 one year membership. Each month, you will receive an information-packed mailing that includes a pre-written message for you to send back to Congress.

This is your chance to tell my Senate colleagues that you expect them to actually do something, like passing REAL national concealed carry reciprocity — and making sure that Obama’s anti-gun Executive Orders are repealed and that we get OUT of the UN gun treaty.

GOA: National Reciprocity ‘Keeps Good People from Going to Jail’ for Being Armed for Self-Defense