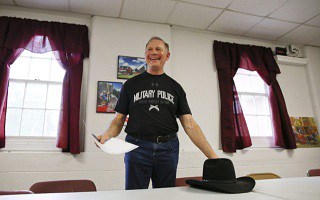 Where does Judge Roy Moore stand on the Second Amendment with the September 26 special election for the GOP nominee for U.S. Senate in Alabama approaching?

Moore is the anti-establishment, pro-God candidate who previously served as the chief justice of the Supreme Court of Alabama. On the campaign trail, his support for the Second Amendment has been as loud and clear as his support for the rule of law.

On August 4, Breitbart News reported that Moore was asked about his stance on the Second Amendment during a Chambers County Republican Club event. According to Roll Call, Moore responded by saying, “We carry,” pulling a lightweight concealed carry revolver out of his wife’s purse. He later added, “I will uphold the Second Amendment.”

Moreover, Moore opposes an “assault weapons” ban or a ban on “high capacity” magazines, and he is against an expansion of background checks because he knows such an expansion is unenforceable without a gun registry. World history–and contemporary history in the state of California–prove that gun registration is a crucial step in undercutting the people’s right to keep and bear arms. …

National reciprocity was introduced in the House on January 3, 2017, and shortly thereafter in the Senate. The common man has been waiting since then for a vote but has been denied by the same establishment that backs Moore’s opponent, Luther Strange.

Gun Owners of America (GOA) supports Moore and stresses that he is the key to pushing national reciprocity across the finish line. GOA Chairman Tim Macy said, “Judge Moore has long been an articulate — and uncompromising — champion for gun rights. And he will fight just as hard for gun owners in the U.S. Senate. There are few men I trust more than Judge Moore.”

GOA stressed that Moore will also help secure passage of the Hearing Protection Act, an act designed to remove the cumbersome requirements that often prevent the common man from acquiring a suppressor for his firearm. Although suppressors are legal in more than 40 states, the ruling class has maintained constraints around them that include paying the federal government a $200 tax on each suppressor purchase and requiring purchasers to be photographed, fingerprinted, and registered in a government database. In short, the common man is treated like a criminal when he goes to buy a suppressor that will protect his hearing while hunting and/or sport shooting. Moore supports doing away with the federal suppressor tax and the other cumbersome acquisition requirements.