A pro-Second Amendment advocacy organization is urging gun owners to call their senators and urge them to vote against the confirmation of President Donald Trump’s nominee for U.S. attorney general.

William Barr (pictured) hopes to return to the position he held at the end of George H.W. Bush’s presidency. But the Senate Judiciary Committee has delayed a vote on his confirmation until next week. 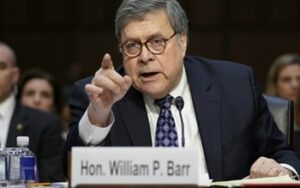 Mike Hammond is Legislative Council to Gun Owners of America, which sent out an Action Alert two weeks ago claiming that Trump’s AG nominee wants to “confiscate” guns – and that his “history as an enemy of the Second Amendment” goes back a long way.

“Well, whatever else he is, he’s a gun grabber,” Hammond says of Barr. “He helped craft the package, which was ultimately passed during the Clinton administration, which banned semi-automatic firearms and put the Brady Bill into effect.

Hammond also says it appears that Barr isn’t even giving the commitment which Trump expects with regards to the Mueller investigation. “So I’m not sure he’s going to be of much use even with respect to the issues in which Trump nominated him for,” he concludes, “but certainly on the Second Amendment, he’s awful.”

Barr’s nomination is expected to advance from the Senate Judiciary Committee to the full Senate for a confirmation vote. Republicans hold a 12-10 advantage on the committee.