GOA’s John Velleco was at the U.S. Supreme Court today to speak with media about how the decision negatively impacts gun owners.

Led by feckless chief Justice John Roberts, the U.S. Supreme Court today upheld the ObamaCare law by a 5-to-4 decision, with Roberts voting with liberals Breyer, Ginsburg, Sotomayor and Kagan.

While the decision means many harmful things for the American public, the Second Amendment community remains greatly affected, 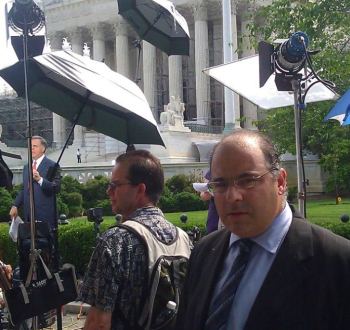 as the law requires Americans’ medical information to be culled and entered into a national database.

Centralizing these medical records will allow the FBI to troll a list of Americans for ailments such as Post Traumatic Stress Disorder (PTSD) to deny them their gun rights, in the same way that the Veterans Administration has already denied more than 150,000 veterans their right to bear arms.

Ironically, the Boston Globe last week reported how snarky liberals have been shocked to learn that hundreds of pages of their most intimate psychiatric notes have been posted into the database — available for reading by hundreds (perhaps thousands) of strangers who work for their provider.

Now, their most embarrassing recollections are semi-public knowledge, and this was done knowingly and unapologetically by the people to whom they were spilling their confidences.  Their privacy is gone, and there is nothing they can do about it.

This is the danger that gun owners face — the sharing of medical information (like PTSD) that can be used in the future to deny them their right to purchase a firearm.

As for the ObamaCare decision itself, the Supreme Court ruled today that the Individual Mandate (requiring all Americans to purchase health insurance) is constitutional under Congress’ taxing power.

Incidentally, ObamaCare was passed amid vigorous denunciations that Congress was imposing an enormous tax on the American people — and on the middle and lower classes.  Thus, by allowing the Obama administration to now argue that it “fooled us,” the Court becomes a co-conspirator in Obama’s fraud.

The culprits?  Well, certainly the tepid, political-wind-monitoring Roberts, who has sold himself to receive favorable media coverage by the liberal left and to get invited to the swanky parties in our nation’s capital.  Ironically, the Senate almost did away with the Senate filibuster in order to secure Robert’s confirmation to the Court.

If there is a silver lining to this decision, it is that the Court ruled that the Individual Mandate CANNOT be justified under the Commerce Clause of the U.S. Constitution.  This is good news for gun owners, as this text has been illegitimately expanded over the years to justify all kinds of unconstitutional laws — including gun control.

Americans now know what we need to do:  We need to repeal the Individual Mandate through a legislative rider (or amendment) to the must-pass Continuing Resolution, which Congress will take up around September 30.  And perhaps, the ultimate way to get rid of ObamaCare is to get rid of Obama.

In the process, we will need to put a constitutional majority in control of the Senate and consolidate and even expand the anti-ObamaCare majority in the House.

But the first line of defense is to force a vote on must-pass legislation to repeal or “defund” the mandate.  You can expect Gun Owners of America to be at the epicenter of this battle.  So please stay tuned for updates!

Constitutional Carry is on the Move in Louisiana!

GOA on IN shooting: We Must Equip Self-Defenders with Necessary Tools

Representatives Vote to Hold the Attorney General in Contempt of Congress