Time to Close Down the ATF

Rep. Issa took on Assistant Attorney General Ronald Weich by asking him: “Who authorized this program that was so felony stupid it got people killed.”

This week, Rep. Darrell Issa (R-CA) beamed a spotlight on the criminal behavior of the Bureau of Alcohol, Tobacco, Firearms and Explosives, commonly referred to as the ATF. At Wednesday’s hearing, Issa took on Assistant Attorney General Ronald Weich by asking him: “Who authorized this program that was so felony stupid it got people killed.”

Chairman Issa started off the interrogation of Weich by 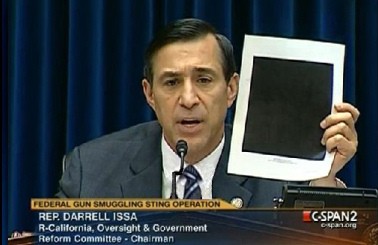 holding up one of the pages that the ATF had provided his committee. It was completely blackened, one of hundreds that had been totally redacted by the agency. (See the accompanying picture.)  Issa told Weich that this was unacceptable and that he was tired of the lack of cooperation at the Department of Justice.

Issa also caught Weich in a lie by pointing to a letter in which he denied any knowledge of Fast and Furious, when we now know that Weich did know about the program. Weich said that the letter had been written by a committee and that he did not know who had written that particular sentence. He refused to commit, however, to finding out who authored that lie and reporting back to Issa about it!

The subject of the hearing was Operation Gunrunner, which had been repackaged in October of 2009 as Fast and Furious. What had been a fairly routine sting operation to make an arrest at the time of an illegal firearms sale became a way of letting guns go unmonitored with criminals into Mexico, as well as in the U.S.

Some 2,500 guns have turned up in Mexico from Fast and Furious, and some 150 people have been murdered by criminals using these arms. Two of the deceased were U.S. federal agents.

Officially, the plan was to run a super sting operation to bring down a cartel or two. On its face, this is a lie, because the ATF refused to work with Mexican authorities. The ATF frequently lost track of the firearms after they moved south of the border, and once the guns were not under surveillance, there was no longer a chain of evidence.

Moreover, U.S. agents need permission to enter Mexico. Failure to do so could result in a year in jail — even for ATF agents who, by the way, are not allowed to have guns in Mexico. ICE agent Jaime Zapata was assigned to Mexico and was prohibited from carrying a gun. While disarmed, he was murdered during an ambush by cartel members who used one of the “Fast and Furious” guns.

In a March 2010 internal memo that was later made public, the ATF trumpeted the violence that was occurring on both sides of the border — violence that was, in part, being fueled by Fast and Furious. Issa’s hearing revealed that Acting Director Kenneth Melson would expectantly watch a “live feed” of firearms sales being made at a cooperating gun store.

It’s like spending the day at the movies, opined Mike Vanderboegh of Sipsey Street Irregulars. “Hey, get me some more popcorn,” he said.

News reports have disclosed that many gun stores in the Southwest had suspicions about buyers that were not flagged by the Instant Check. But these gun dealers were told to go ahead and let the sales take place.

So, what did Democrats do in the face of this damning evidence? They wanted to discuss the need for more gun restrictions.

Sen. Diane Feinstein (D-CA) said Congress needed to pass more gun control because, if one massages the numbers just right (and ignores a whole bunch of others), why, 70% of guns used in Mexican crime supposedly come from the U.S. At least that’s what a brand new report from the ATF claims.

But Issa would have none of that, and he kept the committee focused on all the guns the ATF is helping send to Mexico.

ATF has a long history of death and destruction. Waco was never adequately addressed at the time. Indeed, ATF got a bigger budget the next year. Innocent people such as David Olofson were convicted with perjured testimony. The Bureau has never published a manual detailing how they determine what is, or is not, a machine gun.

We have to thank the agents who had the courage and integrity to blow the whistle on the corruption being fostered by their superiors. But this is only the tip of the iceberg. The Constitution allows no room for gun control, which is why this agency needs to be done away with and the managers of Fast and Furious (and those who signed off on it in the upper echelons of the Justice Department) need to go to jail.

Celebrate Father’s Day with a Bang!

This Father’s Day, get your Dad (or son) the gift that keeps on giving — a gift membership in Gun Owners of America.

You’ll be increasing the voice of the most active grassroots gun lobby in Washington and helping us to stay on the front lines defending your rights.

Click here to give a gift membership in Gun Owners of America.
A GOA membership is still just $20 — an incredible bargain for about the cost of a box of ammo.

Once you click on the above link, fill in the information for your family members or friends.