Urge your Senators to join their team

On the heels of a test vote last Saturday where 50 Senators — including six “Red State” Democrats — voted for an amendment offered by Senator Mike Lee (R-UT) to prohibit virtually all gun control legislation in the Senate, three senators have committed to filibuster any motion to proceed to any gun control legislation.

The three Republican Senators — Rand Paul of Kentucky, Ted Cruz of Texas and Lee of Utah – have cosigned a letter indicating that they would filibuster a motion to proceed to S. 649. 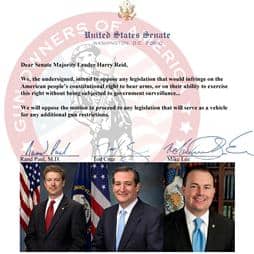 S. 649 already contains the Veterans Gun Ban, which could send you to prison for 15 years for selling, raffling or gifting a firearm in America, while not realizing that the recipient was disqualified in some way — say, for being a military veteran with PTSD or for being a habitual user of marijuana (for medical purposes).

In addition, S. 649 contains Chuck Schumer’s universal gun registry legislation. Although he doesn’t have 60 votes now, Schumer will ruthlessly work to get weak-kneed Republicans to endorse some version of universal registries.

Finally, Reid will allow amendments to S. 649 consisting of the Feinstein gun ban, a magazine ban, and whatever other gun control proposals he feels he can cram down our throats. But not if the Paul-Cruz-Lee filibuster is successful, as the Senate will never reach Reid’s gun control bribe-o-rama where he will be able to threaten, bribe, and coerce other Senators into getting the votes he needs to pass a myriad of gun control restrictions.

ACTION: Contact your Senators. Demand that they support the Paul-Cruz-Lee filibuster of the motion to proceed to S. 649 and to resist Harry Reid’s gun control bribe-o-rama.