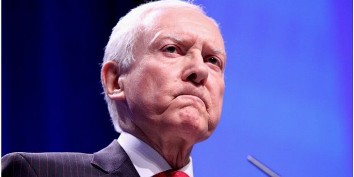 This is welcome news for gun owners. In a Senate career that has lasted more than thirty five years, Hatch has not been a particularly good friend of the Second Amendment.

During negotiations over the 1986 McClure-Volkmer Firearms Owners Protection Act — designed to protect gun owners from abuses of the Bureau of Alcohol, Tobacco and Firearms — Hatch sat at the negotiating table next to officials of the ATF and argued against the pro-gun positions of Sen. Jim McClure.

Though a senior member of the Senate, Hatch did nothing to block camels-nose legislation slammed through by Republican leader Bob Dole in the late 1980s to regulate armor-piercing bullets and outlaw non-existent “plastic guns.”

As ranking member of the Senate Judiciary Committee in 1993-4, Hatch refused to filibuster the Brady Law, even though it would have been possible to kill it.

He supported the 1996 Lautenberg amendment to impose a lifetime gun ban on people guilty of “domestic misdemeanors” – a term so amorphous that it could apply to spanking your kid or engaging in a verbal argument.

In the wake of the Columbine shooting, Hatch voted for amendments which would have effectively banned gun shows, made it more difficult to keep a loaded gun in your home for self-defense, and codified the Bush-era semi-auto import ban.

This package of legislation was stopped in a conference committee only after Hatch and others were pummeled relentlessly by tens of thousands of activists.

Over the following two years, while was working with pro-gun Senators to repeal the gun ban in national parks, Hatch voted against repeal before voting for it in 2009.

Sen. Hatch hasn’t exactly stood up to the Obama administration, either.  He voted in favor of regulatory “czar” Cass Sunstein, who favors a ban on hunting and who would grant animals legal protections in court.

And, despite repeated pleas from members, he voted to confirm Eric Holder as Attorney General.  In addition to being mired in the Fast and Furious scandal, Holder was the point man on gun control for President Bill Clinton and is a vocal supporter of banning many semiautomatic firearms.

Thankfully, Orrin Hatch is facing a serious challenge in this year’s Republican convention.

Senator Dan Liljenquist is a stalwart pro-gun conservative who understands the dangers of compromising with the likes of President Obama.

And State Rep. Chris Herrod also jumped in the race because, he said, “we don’t have much time to fix our challenges” as a nation.  Both Herrod and Liljenquist are “A” rated on gun rights issues.

The candidates will face off in the state Republican convention in April.  If no candidate receives more than 60 percent of the delegate votes, the top two vote-getters will run in a June primary.

Gun Owners of America welcomes the challenge to a Senator with a long history of compromising on Second Amendment rights.