Join GOA and Nick Freitas in Powhatan this Monday

I hope you will join pro-gun champion Del. Nick Freitas and GOA’s John Velleco this Monday, March 9th at 7 pm at the War Memorial Community Center in Powhatan.

You can RSVP for the event here. 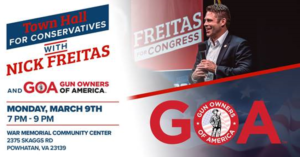 Nick is running for Congress to unseat the radical anti-gunner Abigail Spanberger.

Del. Freitas has been the most outspoken champion for the right to keep and bear arms in the House of Delegates, and that’s why he’s earned the full support of Gun Owners of America.

And Virginia’s 7th Congressional District has been rallying around Nick. In fact, according to a recent poll, the race went from “leaning-Democrat” to “toss-up.”

By sending Nick to Congress, not only are gun owners unseating a gun grabber but also having one the strongest, most proven advocates for the right to keep and bear arms fighting for us every day in Washington.

So let’s continue this momentum for Nick by turning out this Monday at the “Town Hall for Conservatives with Nick Freitas and GOA.”

What: “Town Hall for Conservatives with Nick Freitas and GOA”

Please be sure to RSVP, and we hope to see you there!