VA: We can stop the gun ban in the Senate!

All Hands on Deck! Everyone Must Contact Their State Senator!

Merely Selling One Magazine Could Send You to Jail for Five Years! 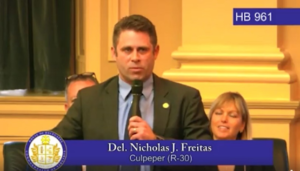 Pro-gun Del. Nick Freitas questioned Democrat proponents of HB 961 in the House, but they failed to provide adequate explanations for the legislation.

With the House having passed the ban on household firearms this week, the Senate is now prepared to start pushing it real hard.

HB 961 is on the Senate Judiciary Committee’s agenda for Monday. And there is a real possibility that we could defeat this ban in the Senate.

Here’s why. The Senate only has a 21-19 Democrat majority and there are four Democrat Senators who might vote against this bill.

These Democrats especially need to hear from you. But that’s not all.

We need “all hands on deck” right now. If every person reading this email were to contact his Senator, we would inundate the Capitol.

So please email your state senator (above), because this bill is a horrendous attack on our right to keep and bear arms!

Here are the highlights of what HB 961 would do:

1) The House-passed HB 961 made the mere possession of magazines that can hold more than 12 rounds of ammunition a Class 1 misdemeanor with 12 months in prison and a $2,500 fine.

The sale of 12+ round magazines would become a class 6 felony, punishable by up to five years in prison. Usurping God-given rights doesn’t seem to bother the new Democrat regime in Richmond!

2) HB 961 also bans the import, sale or transfer of a semi-automatic rifle or pistol with a pistol grip, a second-hand grip, a silencer or a folding stock, or other features. Again, a violation brings five years in jail for a class 6 felony.

Do these legislators have any idea how a five-year jail stint would affect a family? We cannot even imagine the impact to unsuspecting, gun owners and their families being punished to this degree, for never harming anyone!

3) Although the “new” version of HB 961 allows present owners of the banned “assault weapons” to keep their guns — how generous of them! — all future sales will be banned after July 1, 2020. And repairing a banned gun after this date will not be possible because a “part” of a so-called assault rifle is considered an actual assault rifle!

Here is the actual language of the bill which prevents the purchase of repair parts in the future:

So the repair of a legally-owned “assault weapon,” would bring felony charges.

Defeating HB 961 in the Senate is a REAL possibility!

Since the House vote was so close and a few of Governor Northam’s gun control bills did not pass the Senate, we think there is a good chance to defeat HB 961 in the Senate.  But we need your help!

Please send a pre-written letter (above) opposing HB 961 to your Senator right away!

I assure you:  your efforts are definitely having an effect!  We still have much more to do to achieve our goal of stopping the passage of this bill.

Should it pass despite our best efforts, we will do everything we can to repeal it. But for now, our goal is clear, WE MUST DEFEAT HB 961, the most radical assault on our gun rights whichever threatened Virginians!

With your continued support of GOA and your regular contacts with our General Assembly members, I am hopeful we can stop HB 961.  We must engage!  We can’t give up!

Again, thank you for your hard work! I will keep you updated regarding further actions in the senate on HB 961.

Now, please take a few minutes to go above and urge your Senator to vote NO on HB 961. Thanks again!