Written by Rachel Malone Published: 24 May 2019

Have you heard about the “Constitutional Carry for Disasters” bill? It was close to finally passing — but the Senate completely gutted it. And if we don’t get it fixed in the next day or two, we might be stuck with their version, or stuck at an impasse.

I need you to call as many of the lawmakers as you can to help us make at least a very small step forward TODAY before session ends in only 3 short days!

Please call as many members as you can on the Conference Committee on HB 1177. It only takes a few seconds per call. A staff member or intern will answer. Say something like this:

“Hi, I’m a member of Gun Owners of America and I’m calling about HB 1177, Constitutional Carry for Disasters. Could you please ask the [Representative / Senator] to only accept the strongest version of the bill in conference committee? We need to add back in what the Senate took away and pass at least the same version that the House passed. Thank you!”

This spring, the Texas House decided that they could give us a tiny sliver of what is rightfully ours: they passed Constitutional Carry for Disasters, HB 1177. 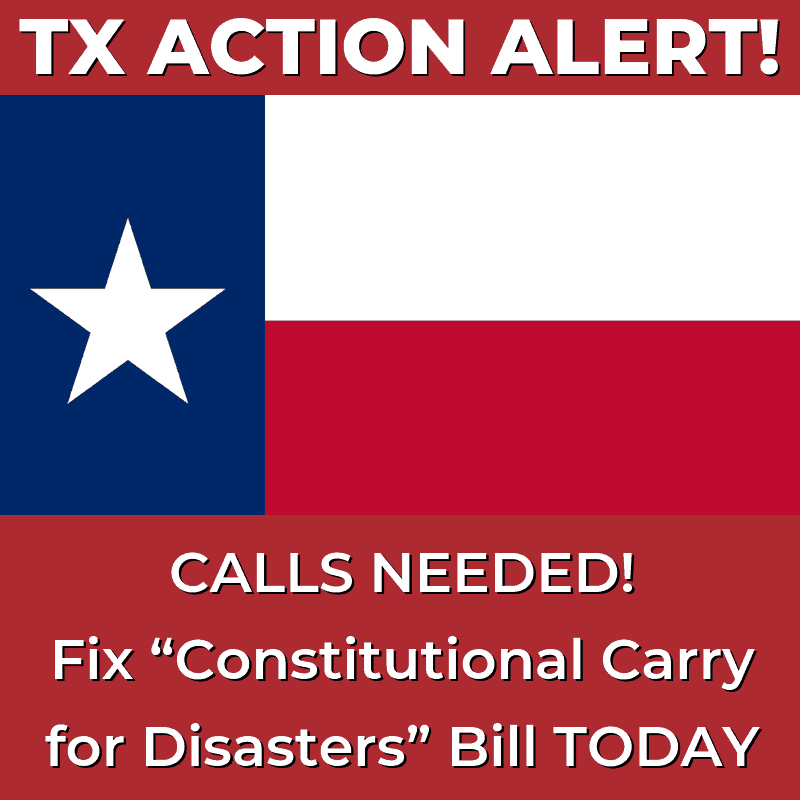 This bill would allow people who legally own a handgun to carry it without a permit when evacuating from a declared disaster zone or returning afterward — for up to a week after the disaster.

The bill also allowed for carrying a handgun in a place that would normally be a “gun-free zone” if the place was being used as an emergency shelter and if the carrier had permission from the person running the shelter.

Well, the Texas Senate apparently thought that was too much freedom for Texas to handle. Chairman Huffman refused to hear the bill until it was completely gutted. The Senate’s proposed version would allow permitless carry only for those evacuating in a mandatory evacuation — and only for 48 hours after the disaster!

And the Senate removed any provision about carrying in a “gun-free” zone.

But we have a tiny window in which to try to fix the bill. Since the House and Senate passed different versions of the bill, members of each chamber are coming together in a Conference Committee to try to agree on a wording.

Please don’t delay! Call as many of the legislators as you can on the HB 1177 Conference Committee and ask them to agree to the strongest version of the bill!