In doing so, Maloney called for Capitol Hill law enforcement to investigate GOA Executive Director Larry Pratt for saying that the Second Amendment is “for restraining tyrannical tendencies in government … especially those in the liberal, tyrannical end of the spectrum.”

In turn, author David Codrea of the Gun Rights Examiner blasted Maloney for her ignorance of the Constitution and for spurning our founding documents.  He even went so far as to say that if Maloney is going to investigate Pratt, then she’d better start investigating other gun owners, too. 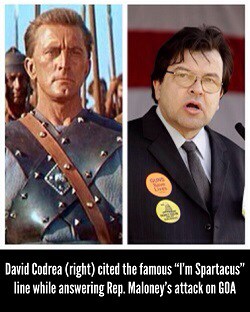 “If the Capitol Police are going to investigate him, they’re going to have to investigate me, too, because I agree with everything he said about the Second Amendment being a last-resort protection against tyranny,” Codrea said.

Over the weekend, thousands upon thousands of gun owners joined Codrea in saying “I’m Larry Pratt,” and they called on Maloney to stop playing partisan politics.

Here are just some of the comments that were posted on GOA’s Facebook page:

* “It’s a pretty pathetic government that wants someone investigated for believing in and standing up for the Constitution!”

* “Why doesn’t Rep. Maloney have the Capitol Hill police investigate the myriad of Democrat scandals? Unless… she’s culpable.”

* “That’s the progressive left mentality for ya… ‘Hey, he believes in rights and doesn’t agree with our views — let’s send in the Gestapo to harass him.’”

* “They should also investigate George Washington, Thomas Paine, and many of the other Founding Fathers!”

Educating Rep. Maloney on the Constitution

In its official response to Rep. Maloney, GOA stated that what the Founding Fathers believed — and what they printed in the Federalist Papers — is that our freedoms which are protected by the Second Amendment are the final guarantee against a tyrannical government:

* “If the representatives of the people betray their constituents, there is then no recourse left but in the exertion of that original right of self-defense which is paramount to all positive forms of government, and which against the usurpations of the national rulers may be exerted ….”  — Alexander Hamilton, Federalist No. 28

* “[The Constitution preserves] the advantage of being armed which Americans possess over the people of almost every other nation [where] the governments are afraid to trust the people with arms.” — James Madison, Federalist No. 46

Gun owners know that there are many other similar type comments that were made by our Founding Fathers — from Thomas Jefferson to George Mason to Patrick Henry.  Apparently, Mrs. Maloney must have skipped that civics class during high school.

The hypocrisy of Maloney and the anti-gun Left

GOA also noted that there is tremendous hypocrisy in Maloney’s latest attack against Larry Pratt, given that she completely ignores REAL examples of threatened violence by the anti-gun Left. 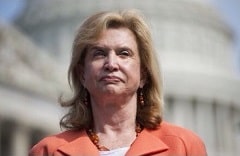 Can you imagine the outrage if anyone on the Right even joked about shooting the President … or ripping out the Vice-President’s heart (or his hair plugs for that matter) … or slitting a female Representative’s wrists … or putting an anti-gun Governor against the wall to face a firing squad?

All these threats were made against politicians on the Right, but after each vile utterance, Rep. Carolyn Maloney stayed silent. She uttered not a peep.

The silence is deafening!

But what she chose to hide from the public is that Giffords was not shot by a conservative activist, but rather by a radical who was a fan of the Communist Manifesto and Mein Kampf.

In other words, he was hardly a right-winger.

The anti-gun Left clearly has a double standard.  They excuse their own outbursts of vitriol, but then go apoplectic when the Right hearkens back to statements made by our Founding Fathers.

Gun Owners of America wants to thank those of you who have stood with Larry Pratt over the past few days.  If you haven’t yet seen our Facebook posts, then please make sure you get future updates by LIKING the GOA page.