One of the more insidious gun control measures of the last 100 years is the federal background check system, called NICS (National Instant Check System). Because the National Rifle Association has become stuck to it, like a tar baby, it has become, for some Republicans, the “gun control we can support.”

But make no mistake: No Second Amendment supporter who actually understands NICS could support its expansion.

I was a consultant for NRA during the 1993-4 congressional session, when the Brady Law was passed and NICS was enshrined in federal law. At the time, I called my boss’ boss’ boss, Neal Knox (who was a good friend), and pleaded with him to steer the NRA away from its support of the Brady Law. 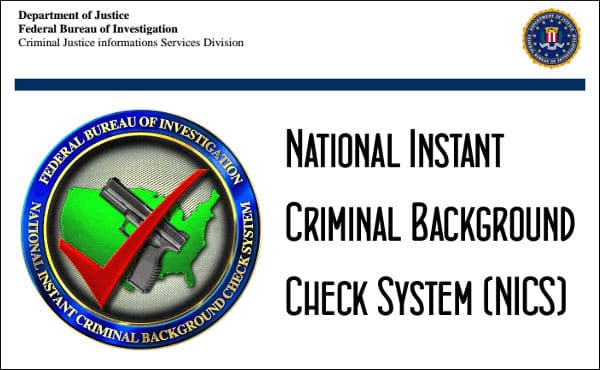 I can still remember Neal’s drawl. He began: “Bob Dole says …” No sentence that begins with the words “Bob Dole says” is going anywhere good.

It turned out Bob Dole had promised that, if we agreed to pass the Brady Law, it would be the last gun control measure we ever needed to pass. It would be the panacea we could use to definitively crush any further calls for anti-gun measures.

So the Brady Law was passed with NRA’s support. Shortly after, Congress passed the semi-auto ban.

It was foreseeable that NICS – far from being the “gun control to end all gun control” – would be a stepping stone that would lead to dozens of calls for addition gun control measures, to fill in the Brady Law’s “loopholes.”

Most criminals who are in NICS don’t shop at gun stores. True, “Bonnie and Clyde” are in NICS and have been so from the beginning. But people who know they would fail a NICS test don’t go into gun stores to try to purchase their guns. Generally, they steal them.

Supporters of NICS brag about the millions of gun sales that have been blocked by the system. Yet, in a recent typical year, only 44 people were prosecuted for “knowingly” trying to purchase a gun when they were prohibited from doing so. Put another way, all but 44 of the millions of denials were deemed relative “innocents” who didn’t know they were prohibited from purchasing guns – or were people otherwise deemed by the Justice Department not to pose a risk to themselves or others.

Or consider this statistic: At least 4,000 times a year, the FBI finds, after the expiration of the Brady Law’s three-day period, that the person subject to the check is prohibited from owning a gun. According to a DOJ report, however, the Bureau of Alcohol, Tobacco and Firearms did not follow up on most of these “seizure orders.” Said the report: “ATF did not consider most of the prohibited persons who had obtained guns to be dangerous and therefore did not consider it a priority to retrieve the firearm promptly. …”

Although 8 percent of all gun transactions are blocked by the Brady Check, most of these are “yellow” (“We don’t know”), and 95 percent are “false positives.”

The reason persons experiencing NICS denials are largely “not dangerous” is that most of the marginal additions to the NICS list are people who shouldn’t be there.

We know, for instance, that at least 257,000 veterans seeking counseling from the VA have been placed on the NICS list on the basis of a psychiatrist’s diagnosis with no due process. In fact, in 2012, Sen. Charles Grassley, citing the Congressional Research Service, said that 99.3 percent of “mental health” names entered into the NICS system were veterans. We also know that, between the enactment of the 2007 NICS “Improvement” law and the present, about 4.3 million mental health names were added to the system. And yet veteran suicide rates continue to increase. And this increase in “mental health” NICS submissions was not able to block any of the last dozen mass shootings. In all of these, the shooter passed a NICS check or stole his gun.

We know, also, that Massachusetts submitted 430,000 names of persons subject to bench warrants for felonies and misdemeanors in that state. This list includes a substantial number of unpaid traffic tickets. Ohio is also vigilant in submitting names of these traffic ticket scofflaws. (After Massachusetts was told that it couldn’t submit these people as “fugitives from justice,” it resubmitted the names under another category.)

We also know that states like Hawaii, Pennsylvania and Massachusetts have debated submitting the names of medical marijuana users to NICS. A law requiring all eligible NICS names to be submitted would require the submission of all medical marijuana lists.

We also know that New York submitted the names of 30,000 New Yorkers who consulted psychiatrists, pursuant to its SAFE Act. And Connecticut, Indiana, Washington, California and Oregon now allow guns to be seized pursuant to “star-chamber” secret hearings in which the gun owner is barred from participation.

Finally, we do know that there are some 50-year-old felony paper records of “bar fights” and other felonies that have not been submitted because the “felons” have lived exemplary lives since then.

It is also true that the armed services were, prior to Sutherland Springs, lax in reporting servicemen’s names to NICS – arguably because of the pervasiveness of firearms in the military. That gap is being vigorously administratively addressed. You don’t spend $625,000,000, as the “Fix NICS” bill does, to address a problem that has already been solved.

You don’t go into a gun store and submit yourself to a Brady Check if you think you’ll be denied.

And any legislation that spends $625,000,000 and creates a federal mandate to force the submission of EVERY POSSIBLE NICS name will largely victimize the innocent, without performing any useful purpose.

After the fact, people like Jared Loughner, James Holmes, Adam Lanza and Nikolas Cruz were regarded as having “acted strange.” But guess what? “Acting strange” isn’t a legal concept. And each one of these came to the attention of authorities without any conclusion that they posed an actionable threat. And this was despite the fact that they had committed felonies and used drugs.