Click on the Take Action button and let your Senators know that 81 percent of our nation’s police officers support arming teachers and school administrators.

The Gun Control Battle is Winnable, But Every Gun Owner Must Step Up to the Plate!

First, I want to thank you so much for the activism that you have put in this week.

I sent you an alert almost every day — and you realize that I don’t normally do that.

But you obviously recognize what’s at stake. 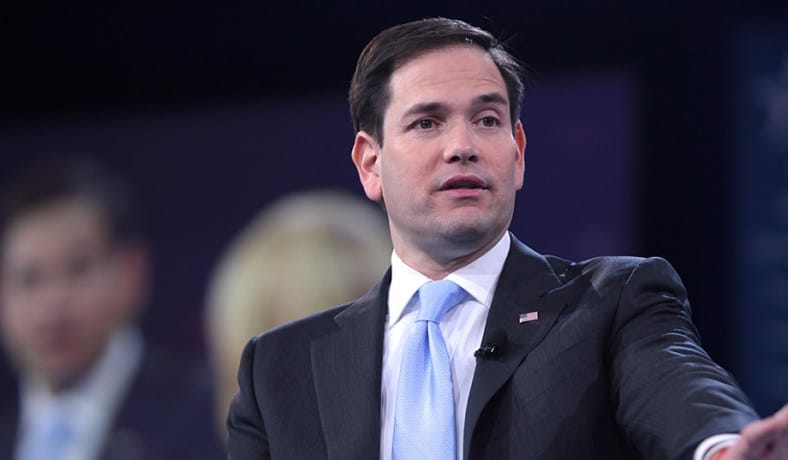 It’s so important that Congress and the President hear from us, or else they will only be hearing from the anti-gun Left.

Your phone calls to Washington were well-timed. Because remember, we did not hear one word of arming teachers from the President until you guys started deluging the White House with calls.

I also want to let you know that we’ve been fighting hard here in Washington, DC.

We are meeting with key congressional offices to buck up the opposition to ANY and ALL infringements.

We are planning to bring pro-gun “victims” of mass shootings to Capitol Hill so that their voices can be heard.

GOA spokesman have appeared on dozens of talk shows and TV outlets — including Fox and CNN.

In case you missed it, you can see some of our media appearances here:

* A Fox News debate, where I called for defending our children in the same way we protect Congress and the President — with guns!

* A CNN debate, where viewers stated that “GOA shut down the Clinton Network News reporter” and “took this fool to fact school … that’s why I now have a GOA membership!”

* USA Today column, where 90 percent of viewers agreed with the GOA position!

We’ve defeated gun control before — even under difficult circumstances

I know the opposition against our God-given rights is intense right now.

But please remember that we’ve been to this rodeo before.

After Columbine, the Left conducted a six-month crusade for gun control — with a magazine running a jet black cover (symbolizing death) and the full power of the presidency against us.

In the end, only two senators — TWO — resisted the siren call to vote for Clinton-type gun control, and yet we still managed to pull out a victory because of a key pro-gun Republican in House (Rep. Tom DeLay).

After Sandy Hook, every major voice in the country proclaimed that we had reached a tipping point and that the “gun lobby” would be utterly destroyed. 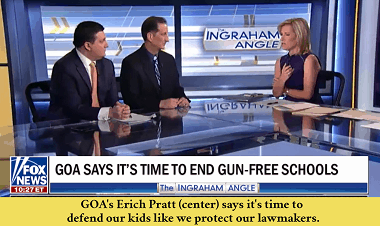 Anonymous hate mail threatened to kill us and our children. Yet, with the help of pro-gun champion Senators such as Mike Lee and Rand Paul, we stopped all gun control.

Some Republican Senators are caving

So the current gun control campaign — organized by billionaires in New York and Los Angeles — is nothing new.

Make no mistake about it: The children of Parkland, Florida, who are mouthing Bloomberg talking points have been twice victimized.

First, because they were forced to go to school in a defenseless, gun-free zone. Second, because the billionaire Left — led by prospective Democratic nominee Oprah Winfrey, anti-gun George Clooney, and anti-gun Stephen Spielberg — are bankrolling a gun-control march on Washington which will advocate the taking of their liberties.

As was the case after Columbine, there are fearful, squishy Republicans who are now threatening to bail ship — on “Trojan Horse” bump stock bans … background registration checks … and more.

GOA’s Chairman Tim Macy authored a blistering oped this week, warning Republicans “to get ready for a major butt kicking if you go down the road of stomping on the Second Amendment.”

Leftist White House advisors are pushing Trump to embrace a wide variety of gun control. Not surprisingly, these advisors don’t know a whole lot about guns.

But if the Trump administration tries to outlaw guns and accessories by illegal executive fiat, we will take his administration to court — and we think we can win if we can get it before the Supreme Court. However, that’s tomorrow’s problem.

Thanks to House Republicans, passing gun control will not be easy

Today’s problem is making sure Senators Chuck Schumer (D-NY), Dianne Feinstein (D-CA), Chris Murphy (D-CT), and John Cornyn (R-TX) do not create a $625,000,000 “bribe pot” to get millions of additional names in the NICS system. 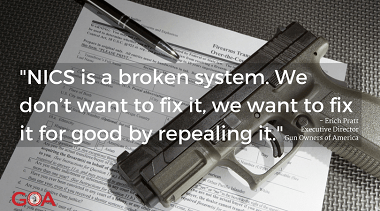 These names would include more veterans, more traffic ticket scofflaws, more medical marijuana users, more “SAFE Act” New Yorkers who are turned in by their psychiatrists, more Californians who are stripped of their guns in “star-chamber” proceedings which they are barred from attending.

The good news is this: As a condition of passing H.R. 38 — the Hudson reciprocity bill — with a “Fix NICS” amendment, the House leadership committed that it would not consider a Senate passed “Fix NICS” bill unless it contained reciprocity. Chuck Schumer would not allow such a combo-bill to pass the Senate.

So, by insisting on that linkage, the House has effectively killed “Fix NICS” for more than two months.

But we need to understand that the weight of the world will be brought down on the House to break its promise and capitulate.

So we are counting on our Senate heroes — Mike Lee and Rand Paul — to object to any “unanimous consent” request which would allow the Senate to consider a straight gun-control “Fix NICS” bill. They need your encouragement and your support.

The congressional Republicans who have not kept faith with their campaign promises need to hear from you.

For example, Florida gun owners should politely, but firmly, admonish Sen. Marco Rubio (R) for his compromising statements this week and encourage him to stick to a “shall not be infringed” defense of the Second Amendment.

In the end, if the Republican Party becomes “THE PARTY THAT FINALLY DELIVERED GUN CONTROL, AFTER EIGHT YEARS OF FAILURE UNDER BARACK OBAMA,” it will lose its base and be flushed down the toilet bowl of history.

The sooner it learns that lesson, the more likely it is that the GOP will grow because of media-generated copycat shootings, rather than being crushed by them.

Make no mistake about it: The rioting liberals will settle for nothing less than a massive gun ban and confiscation program.

And they have never voted for a Republican and will never do so.