“The Republicans [want to] agree to an omnibus continuing resolution [which] will be all the way from now through September 30th.  Meaning the Democrats, even though they lost, are going to run the budget show for yet another year, and we’re all sitting out here and asking ourselves ‘why’ and scratching our heads.” — Rush Limbaugh, December 8, 2014

It’s no wonder why Washington fears our grass-roots activists so intensely.

The $1.1 trillion deal between Boehner and Pelosi to fund the government until September 30, 2015, was supposed to be anointed by every member of the Republican caucus. 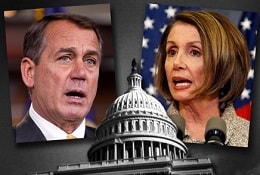 But, thankfully, you’ve given valuable aid and support to several dozen conservative members of the House of Representatives.

PAT YOURSELVES ON THE BACK!

“Gun Owners of America warned against doing exactly what the Republican leadership is planning in a November 17 alert.” — David Codrea, The Examiner, December 8, 2014

Now, because of your efforts, between 40 and 50 Republican representatives have ALREADY jumped ship and are opposing the Republican leadership, says Rep. John Fleming (R-LA), who is a also a GOA Life Member.  And with Rush Limbaugh on Monday echoing the message we have been spreading for the last two weeks, the hemorrhaging of the Boehner-Pelosi loyalists can only spread.

This means that at least a fifth — and maybe more — of Pelosi’s minions will have to be ordered to support Boehner for it to pass.  And Pelosi has made it clear to the press that the bill will have to be altered to be satisfactory to her in order for her to provide those votes.

The $1.1 trillion bill — which may run for thousands of pages — will be sprung soon, in anticipation of a House vote on Wednesday or Thursday.  This is precisely the type of ObamaCare-like fraud and secrecy that Republicans said they would abandon when they took control.

WILL GUN POLICY BE SET BY THIS ANTI-GUN CONGRESS?

On guns, there will be both pro-gun and anti-gun provisions which will be carried forward from previous years.

But if we could just delay writing the bill till January — when Republicans will control both the House and the Senate — there is so much more we could do:

* We could push to eliminate the Schumer amendment, which prohibits non-violent Americans who have made mistakes from EVER getting their gun rights back.

* We could stop the ATF from creating regional gun registries by copying 4473’s during routine annual inspections.

* We could put the “kibosh” on the anti-gun aspects of ObamaCare, including the entering of gun-related information in the federally run health database.

Instead, we are faced with a Boehner-Pelosi “December surprise” which effectively gives Obama a pass with respect to all of his illegal actions on guns and immigration.

And what about last Thursday’s House vote, where Republicans declared, in effect, that they were very, very angry that Obama had stripped them of their powers?  MSNBC’s Sam Stein put it pretty well when he said this was just a Boehner trick to allow hapless Republicans to “show their rage … without undermining everything we have to do.”

One more thing — and that is the precedent this may create for Boehner’s actions during the 114th Congress which is coming up: According to Politico’s Glenn Thrush, there is an open question as to whether a Boehner-Pelosi deal to crush Republicans could cause Boehner to “acknowledge reality and actually start passing bigger, more important pieces of legislation [like an anti-gun amnesty] using this across-the-aisle Nancy Pelosi thing….”

ACTION:  Contact your Representative. Tell him or her to vote against the Boehner-Pelosi “you-have-to-pass-it-to-know-what’s-in-it” giant non-transparent funding bill.

NOTE: This alert contains different messages for Republican and Democrat Representatives. By using the GOA Engage site to contact your Representative, the system will automatically select the correct letter.