WY: Support the Second Amendment Protection Act in the House! 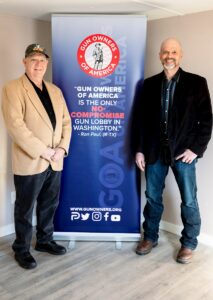 This Bill, if enacted into law, would make it illegal for state and local officials to enforce or cooperate with unconstitutional Federal gun control.

Two anti-Second Amendment groups opposed the Bill in the House Judiciary Committee on Tuesday, but the Committee voted to move the Bill to the House Floor by a 6 to 3 margin.

The Committee also added a strengthening Amendment to ensure firearms accessories, magazines, and ammunition are protected along with firearms.

THIS BILL WOULD BE A HUGE WIN FOR WYOMING FIREARMS FREEDOMS!

This bill has the support of the Wyoming Association of Sheriffs and Chiefs of Police, and these Wyoming officials have made it clear they intend to defend the Second Amendment Rights of law-abiding citizens by prosecuting state or local officials who would enforce federal gun control.

Now the battle for the Wyoming Second Amendment Protection Act is moving to the floor of the House of Representatives.

Please contact your Wyoming Representative and ask him or her to vote to pass the Second Amendment Protection Act without weakening Amendments.

So again, please contact your Representatives and urge them to pass this legislation into law.

GOA Sees an Opening as Ukraine Arms its Citizens