Ted Cruz is the Solid, Pro-gun Candidate in the Presidential Primary

“If conservatism is your bag, if conservatism is the dominating factor in how you vote, there is no other choice for you in this campaign than Ted Cruz.” — Rush Limbaugh, February 10, 2016.

As the Presidential Primaries move into South Carolina and Nevada, Gun Owners of America urges you to help support Senator Ted Cruz to victory in those states. 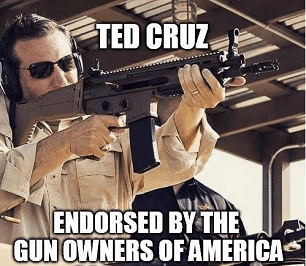 Let’s look at the reasons why GOA has endorsed Senator Cruz for President, and why we believe he is the only Constitutional Conservative in this race to save our nation.

* Cruz was the first, AND ONLY Presidential candidate to return the GOA questionnaire on the Second Amendment.

* Cruz has promised gun owners that, as President, he will remove the United States as a signatory nation to the anti-gun Arms Trade Treaty — a U.N. treaty that would fully implement a system of gun owner registration if ratified by the U.S. Senate.

* Cruz has promised gun owners he will repeal ALL anti-gun Executive Orders that circumvent Congress and veto anti-gun legislation if it reaches his desk.

* Cruz has already demonstrated his willingness to fight for our Second Amendment rights. He is working with GOA on legislation to repeal the Obama Administration’s gun ban that is (and will) affect millions of military veterans and senior citizens.

* Cruz has opposed efforts to reward millions of illegal aliens with citizenship and voting rights, given that the majority of them are anti-gunners who have ignored and flouted our laws.

* Cruz has cosponsored legislation to allow concealed carry reciprocity for law-abiding gun owners. This legislation (S.498) is of special importance to GOA members and activists. It is one of our chief priorities in Congress.

* Cruz stood up to Senate leadership for failing to block the confirmation of President Obama’s executive and judicial nominees. In particular, Cruz let gun owners know that Republican leadership could have — and should have — blocked the confirmation of radical anti-gun Loretta Lynch for Attorney General. You would think that after the disaster of Eric Holder as Attorney General, that Republican leadership would have the guts to stand with Cruz in this fight, but they turned their backs on Cruz and gun owners across America.

* It was Cruz who led the filibuster fight in 2013 against funding the anti-gun ObamaCare law, which will facilitate the disarmament of millions of gun owners once the law is fully implemented.

Cruz recognizes how computerizing the medical records of millions of gun owners will allow the federal government to troll those names and add millions of honest gun owners to the NCIS system, in the same way that the Obama Administration is currently using medical information to disarm military veterans, and proposing to do the same with senior citizens!

* Cruz has repeatedly stated he will completely repeal ObamaCare as President, and he has already introduced S. 339, which would repeal the health care law.

* Cruz is the best candidate for President who has the knowledge and background to appoint Judges, especially to the United States Supreme Court, who will uphold the Constitution and protect our nation from the radical agenda of the left.

Ted Cruz is THE CONSTITUTIONAL CONSERVATIVE in the presidential primary.  Rush Limbaugh recently said that, “If conservatism is your bag, if conservatism is the dominating factor in how you vote, there is no other choice for you in this campaign than Ted Cruz.”

While Rush’s statement is true, you could also replace his use of the word “conservatism” with the words “gun rights” — and his statement would be just as true.  Cruz is THE ONLY candidate in the race who has not waffled on issues that are important to Second Amendment advocates.

I urge you to contact Cruz headquarters (here) and sign up to help Ted Cruz to victory in these next two Primary states.

Ted Cruz is our best hope of saving America from the hard-left anti-gunners trying to destroy our nation. And we are Ted Cruz’s best hope for victory. Please get in the fight today.

Gun Owners of America.  Not authorized by any candidate or candidate’s committee.