That’s why Gun Owners of America is proud to endorse him for re-election the United States Senate.

You see, now more than ever, your gun rights are in existential danger. 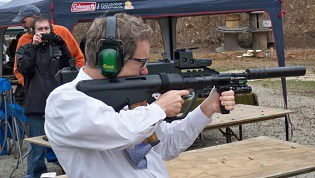 Barack Obama has waged an unprecedented war against gun rights, issuing a crushing tidal wave of executive actions that will repeal the Second Amendment, bit by bit.

And Hillary Clinton vows to take it even further.

Her goal is to end private gun ownership in the United States.

And she is willing do it.

But Senator Rand Paul has been there to fight back, every step of the way.

> He has a strong pro-gun voting record.

> He has sponsored, co-sponsored and fought to bring to the Senate floor pro-gun legislation.

> He sponsored the Arm All Pilots Act to protect airline passengers from terrorists.

> He took on GOP leadership for selling your rights as political bargaining chips.

> He is leading the fight in the Senate to kill the confirmation of Obama’s anti-gun judges.

> He is leading the fight in the Senate to kill Obama’s plan to kill gun rights through the United Nations’ Arms Trade Treaty.

Every time your rights have been in danger, Senator Rand Paul has stepped in to fight for you.

That’s why the anti-gun political machine, and the D.C. establishment, has targeted him for defeat.

They’re hoping to use the massive presidential year election turnout to deliver enough votes to beat him.

We must fight back twice as hard.

Click here to help GOA in this important election year.

We are going to send a message to Hillary Clinton.

You don’t touch our gun rights.  Never.  No compromise.

Volunteer for, donate to, and get out and vote for Senator Rand Paul.

That’s how we defend our gun rights, and that’s how we can save them for the next generation.

His re-election would make Barack Obama, Hillary Clinton and the GOP establishment miserable.

Every time your rights have been in danger, Senator Rand Paul has stepped in to fight for you.

Take action to defend your rights. Volunteer for, donate to, and get out and vote for Senator Rand Paul.

Paid for by Gun Owners of America
www.gunowners.org
Not authorized by any candidate or candidate’s committee.

Man Robs Store With Fake Gun, Gets Shot By Clerk’s Real One