Click on the Take Action button to email state Attorney General Josh Shapiro, urging him to prosecute the criminal actions of Mayor Bill Peduto and the Pittsburgh City Council. And for those in Allegheny County, call DA Stephen Zappala with the same request at (412) 350-4400.  Or copy-and-paste the message at the bottom of this email and send it to his media director, Mike Manko, after clicking here to pull up his email address.

As you are probably aware, Pittsburgh has been ground zero for gun control recently. 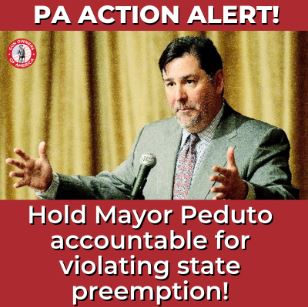 In response to the Tree of Life shooting, the Mayor and City Council of Pittsburgh are intending to pass ordinances to ban semi-automatic rifles and enact other gun control measures. These actions are in clear violation of the Pennsylvania state preemption law, but the effect could extend far beyond the City of Pittsburgh.

You see, Mayor Bill Peduto wants Pittsburgh to the be the test case for local gun control in every city and township across Pennsylvania and the United States. In fact, he recently attended the US Mayor’s conference where he allied himself with David Hogg to push for that very thing.

Allegheny County District Attorney, Stephen A. Zappala, notified the City that their proposed actions were illegal and that they could face criminal charges, but the Mayor and City Council ignored his warnings and introduced proposals to violate the preemption law and your Constitutional rights.

In response, citizens have filed private criminal complaints against Mayor Peduto and the Pittsburgh City Council.  You can see some examples here.

But these brave individuals need your help to ensure that the District Attorney and the State Attorney General, Joshua Shapiro, are held accountable for upholding the law and bringing the Mayor and City Council to justice.

Or simply copy-and-paste the message below to his media director, Mike Manko, and click here to pull up his email address.  The pre-written text below urges Attorney Zappala to prosecute the criminal actions of Mayor Peduto and the Pittsburgh City Council.

If you live outside of Allegheny County, then email state Attorney General Josh Shapiro with the same request.

Let the both of them know that you expect them to uphold the rule of law and prosecute these criminals.

—– Copy-and-Paste this letter to District Attorney Stephen A. Zappala and email to his media director, Mike Manko, by clicking the email address here —–

As an Allegheny County resident, I want to thank you for your January 9, 2019 letter to Mayor Peduto and the Pittsburgh City Council advising that “City Council does not have the authority to pass [gun control] legislation.” Nevertheless, the Mayor and City Council have acted in defiance of the preemption law and introduced proposals 2018-1218, 2018-1219, and 2018-1220.

Quite frankly, I am outraged!

I stand with the brave citizens who have come forward to file private criminal complaints and demand that you uphold the Constitution and laws of this Commonwealth. Municipalities have no authority to enact gun control legislation and the City of Pittsburgh’s actions are brazen lawlessness.

Mayor Peduto and the City Council members have attempted, solicited, and conspired to introduce and have introduced proposals 2018-1218, 2018-1219, and 2018-1220, which are preempted by Article 1, Section 21 and 18 Pa.C.S. § 6120, for the sole purpose of denying or otherwise impeding individuals residing in or traveling through Pittsburgh the exercise or enjoyment of their rights and privileges.

All too often, I see politicians and government officials defy the law with impunity while ordinary citizens are expected to toe the line. This must stop!

I urge you to stand up for justice and end the double-standard. Please prosecute the Mayor and City Council for their criminal behavior. Gun Owners of America will keep me informed as to your decision.